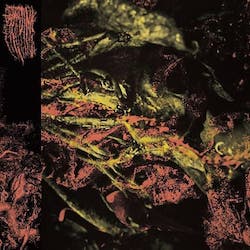 The first thing that came to mind whilst playing Hissing’s debut full length record is Portal. Permanent Destitution sounds like a meatier more vibrant version of the aforementioned band; you can hear the swarming distortion of Portal and a tad bit of technical guitar and drum playing, which when combined creates a warped leitmotif. Hissing is not a copycat band, yes the influences of Portal are easily heard; however, there are other styles thrown into the mix such as sludge and doom metal. Being my first introduction, upon discovery I immediately thought death-core, I really don’t know why or perhaps it’s because I’m familiar with Italy’s Hiss From the Moat which started as a death-core band, either way, Hissing turned out to be something different. The band plays such that the direction of the rhythm is very difficult to predict if any exists. I consider their style to be a very relentless, abrasive, technical formula of black and death metal with the minimal incorporation of death/doom metal. Having heard bands play within the same vein as Hissing, I spent most listens scavenging for things that I could attribute to the band as not necessarily original but distinctive and integral to their identity.

Because Permanent Destitution is so loud and chaotic sounding, it was almost impossible to discern what was it Hissing offered that separates them from Portal and the likes of. After about 6 consecutive listens it occurred to me that Hissing’s atmosphere does not build it remains the same throughout the playtime of Permanent Destitution. To some that’s a bad thing and to others that’s a good thing, although within the compositions lies much talent to be heard, with it brings the burden of audible diversity. Here’s the problem, the music does have many alternating sections enough for a semi technical label, but the amount of distortion becomes distracting at times. This gives the music an exhausting feeling, bearing in mind it is probably what the band was aiming to achieve by implementing the effect; however, they should have toned it down a bit so the music could breathe. Permanent Destitution is not harmed to the extreme of boredom but does sound a bit monotonous sometimes. The first track, “Backwards Descent” is a great opener, the technicality is introduced early on along with the cloud of chaos created by the effect pedals. Moving into later installments I got the feeling as though the technical aspect of Hissing’s playing began to fade gradually. When compared to “Backwards Descent”, “Pablum Abundance”, “Eulogy in Squalor”, etc did not exhibit as much technicality as I assume they would have. To some extent this creates the feeling of deterioration musically by stripping away the complex segments thus leaving the foundation of the rhythm to take precedence over select sections. “Eulogy in Squalor” which is definitely my favorite piece on the record, it's a well organized track that showcases all facets of Hissing’s playing techniques. There’s the death, doom, technicality and crazed distortion unified to deliver a memorable piece. “Cascading Failures” took a pause from the aggressive style and substituted it with slower death/doom-esque sections, there is little to no technicality on the track, but the music is played with feeling, enough to portray the idea of structural retro-gradation. Judging by the title of the opening track, It would be safe to assume that the songs following “Backwards Descent” were intentionally designed to reflect disintegration, as if mimicking de-evolution or from biological advancement to a continuously regressive fetal posture mentally and physically.

Although being very similar to Portal, Hissing’s Permanent Destitution has one thing that differentiates them and that’s the meaty bass and production. I like that element, thus said, I’ve started developing an inclination towards Hissing therefore a vinyl purchase is imminent. Regardless of the minor faults of Permanent Destitution, fans of Portal, Impetuous Ritual, etc will enjoy this piece of work. It’s a sincere effort aimed at delivering sonic entropy; an effort which saw a successful outcome.