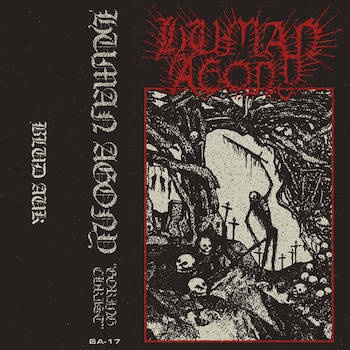 Released since February of 2018 on Blud Auk tapes then later scheduled for a reissue on Invictus Productions in December of 2018, this bestial black/death metal slob of shameless sacrilege comes clawing from the whore’s womb in a disgusting display known as Goring Christ. Filthy as any sewer this ep managed to go unnoticed in the underground for quite some time until the stench became noticeable enough for a repressing.

This is bestial, raw and barefaced blasphemy spewing from every guitar lick, every pound of the drums and every nasty hawk from the vocalist. Not surprised this is coming from Canada, a place notorious for worshiping the untamed forces of black metal. Clocking in at 22 minutes, Goring Christ unleashes a chamber of torments that never lets up intensity. The vocals are like a merging of Shamaatae’s from Arckanum and the belting technique usually heard on “war metal” albums such as Blasphemy’s Fallen Angel of Doom. The drumming ranges from a primitive stomping in mid paced and faster sections whilst the riffing follows the drumming clumsily sometimes to give the music that unadulterated rawness. The names of the tracks are absolutely vile and blasphemous, “Humiliating Nazarenic Corpse”, "Satanic Immersion in Goat Piss” and "Human Pig Execution Ritual” carry a miasma of destitution and disgrace. These names are usually what is expected from any band involved in the bestial scene, however, its the killer compositions and production that really makes Goring Christ a diary of dirt and displeasure. Human Agony mixes bestial black/death metal credibly with the mid paced sections of doom metal on tracks like “Master’s Abhorrent Bleats” and “Abomination Hammer” all the while keeping the ferocious atmosphere close to heart. The thing I admire the most about bestial black metal is that no matter how hard you try, you could never really make out what is being said by the vocalist, however, after reading the lyrics (if publicized) the pronunciation and enunciation actually makes sense; incredible. This venomous attack by Human Agony is short and noxious, it has the traditional “war metal” sound plus the feeling of a contaminated atmosphere. Also it is noteworthy that many of the riffs on Goring Christ sound reminiscent of the early 90s death metal scene, thanks to the fantastic production, the clarity of these riffs helps the music to exhibit the talent behind the guitars.

Goring Christ was fortunate to survive the onslaught of killer releases in 2018; it was almost buried in time, but thanks to Invictus Productions this catastrophe of cremation has the ability to magnify its impact in the underground.