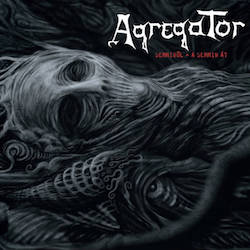 Sometimes I want to kick myself for discovering great bands late in their career and Agregator is one of those bands. Having been active since 1997 with a span of 4 demos, 2 Eps and 5 albums I'm so angry that I am only now finding the band. Agregator play a gothic style of melodic death metal and they do a fine job at it on their 2017 entry, Semmiből, a semmin át. Whilst going through a list of promos I thought to myself “hmmm that artwork looks dark, what could this possibly be?” Little did I know I was about to discover one of the hidden gems in the melodic death metal genre and metal as a whole. After hearing the very first track, I took to The Metal Archives and began my investigation of the band. “How did Agregator remain underground for so long?” is what I immediately thought after seeing their activity over the last 17 years. It's unfair that other bands not nearly as gifted as Agregator are signed and receive support to this day despite releasing lack-luster material, material that doesn't even qualify at the Karaoke level. I digress before I wander off into a rant about over-saturation and its negative effects in the metal scene. Imagine Swedish melodic death metal merged with elements of metal-core and gothic metal; given the artists behind the compositions are competent (in which they more than are in Agregators’ case) what you'll get is a highly addicting and memorable injection of melodic death/gothic metal entrancement.

From the first track “Vérnász” which roughly translates to “From Nothing to Nothing”, Agregator’s ability to compose catchy riffs and choruses is immediately put on a glaring exhibition. The guitar work has a touch of both elegance and rhythmic adhesion, it flows well with the drumming and does not break the trance for needless intervention during the playing time of the record. Thus being said, it must be pointed out that the better half of the album is the A side. The songwriting is stronger early on with lots of memorable choruses and guitar combinations/harmonies happening on tracks such as “Vérnász “, “Hol a senki jár” and “Az égő bokrok kertje”. Those songs are so strong that some songs on the B side of the record seemed incomparable even though they are still very good tunes in which “Nem Hizem” is the definite highlight of the B side. Some tracks on the B side even reused chord structures/patterns of the A side to finalize the closing segments of Semmiből, a semmin át, just to reinstate how tough the A side is on the record. The most prolific feelings on the record are that of melancholy, pessimism and compassion; they are adequately and convincingly represented through both the deep growls, tone and lyrical content which when translated, seem to tackle dark thoughts and feelings mixed with a slight sense of romanticism. All these aspects of the music is mixed well with each other to create a toggle of emotional content throughout the listening experience.

The track “Az egésztől innen, mindenen túl” which roughly translates to “From All Over Here, Beyond Everything”? According to Google Translate, is a track written in memory of Roland Liviczki whom was Agregator’s bass player that passed away in the year 2012; guest musicians from bands such as Dalridia, Reason, CasketGarden and Niburta amongst many others, including a group named The Sinner Choir which was composed of Roland Liviczki's friends and friends of the band. The track has a feeling of progression and pride; given the lyrics seem to honor Roland Liviczki by giving a brief introspective of the individual. There is a particular lyrical text that when translated to English goes, “It does not have to be a good word And you do not have to take it”; when I read it, immediately it made me think of bands that make metal because they are passionate and motivated by a vision/dream that is not propelled by financial success or critical acclaim. So regardless of what the reviewers say, write or think, the passion to carry on and make music that the band and supporters of the band’s/bands music can relate to and appreciate wholeheartedly will always exist regardless. It is for that reason I think Agregator is such an underrated band, they are a humble bunch deserving of much more than they are given by this over-saturated genre of music that makes it ever so difficult to find worthwhile bands. Semmiből, a semmin át is an album that is a journey through multiple emotions, it is engaging and provokes deep thought and analysis, it is a record that upon first encounter will remain stuck in your memory for a very long time. Speaking of which, I don't know the Hungarian language, yet I have found myself singing along to some of the tracks. The replay-ability is high and time goes by quickly when listening, thanks the highly immersive guitar riffs, drum patterns and clean production highlighting Agregator's strengths. I hope there is more to come from Agregator in the future given this criminally under-appreciated work.