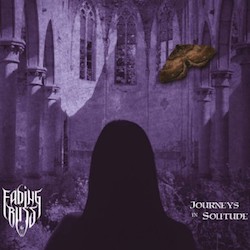 Journeys in Solitude is a gothic/doom metal album by a band that appears to be unfairly lumped in with the overwhelmingly large gothic/doom metal scene, thus aiding their obscurity after two albums. Fading Bliss' music is like an ever enclosing cell of despair that crushes the listener after paralyzing him/her. To equate Journeys in Solitude to any other album released this year or in the past would be unfair even though you can hear influences from other bands slithering throughout each song. That’s because there is something special about this release despite its common attributes there is a certain feeling that drains the listener/s energy when Journeys in Solitude is being played. It’s such a depleted feeling that hovers and showers the listener with an unrestrained force that leaves you in a gaze. All of your energy feels as though its being sucked from you and given to the music. This moment is at it's peak whenever the female vocalist sings. Her voice is like a molecule of water that expands gradually and infinitely, encapsulating everything in its path until all captured has its energy siphoned and commingled as a part of the burgeoning scintilla. Each song tells a different tale, each baring a different feeling represented by a distinguishable melody.

“Ocean” dragged me back to the early 2000s when symphonic and melodic death metal was storming throughout the scene. That deep symphonic soar coming from the female vocalist which is backed up by the male growling vocals calls to that era. The title matches the rhythm of the music which sounds like a tide steadily building along the shore by the time of the guitar solo. The synergy of the contrasting vocals but more-so the guitarists (bass and lead) and the drummer helps to mold the music into a soothing wave of refrain. You feel like you're being swept away as the music plays. The immersion on “Ocean” is great, it takes you along for the ride through many feelings due to the compositions accuracy. The guitar solo on the track is excellent, it follows through with the steady momentum and pacing of the song. It ads to the immersion factor going for the track, which then closes with the sound of the waves crashing ashore. A near perfect introduction for what is to come.

“Mountain” sounds grand, it’s the best track on the album in my opinion, the opening growls feel very towering/mammoth/mountainous. Like you’re in the presence of the mighty forest’s omnipotence; the effect of her full force challenged by the miraculous beauty she exhibits daily is marked by the harsh growls and the femme-fatale vocal style. The vocals on Journeys in Solitude are remarkable as they embrace each other to form something that I can deem the best gothic/doom metal album I have heard in 2018. The keyboard segments are as I would imaging them to be, they add to the abstraction of the overall composition. Sometimes all that’s needed is a few soft keys to inject the monolithic tone with a dulcet touch. The landscape painted by Mélanie and Dhal’s vocals is sensational, the way their vocals stretch/span across the music makes its force seemingly overwhelming. The following track, “Forest”, is a cover, one that I did not really care much for but it was played well by Fading Bliss.

“Desert” has a very downcast tone throughout its playtime. It conjures feelings of being lost and hopeless in a place of nothingness, like being surrounded by miles of sand and mirages of hope. The feeling summoned is empty and takes the listener through a 17 minute journey of pure melancholy and darkness. Those whispering vocals are perfect for a song such as this, as it portrays the idea of being alone with only the haunting voice of your darkest thoughts there to keep your company. Such a tormenting track “Desert” is, the many techniques used to convincingly portray a diorama of absolute pessimism are effectively implemented. There are no moments of extraneous additions to the music, every audible aspect serves a purpose.

Each entity uses a different perspective to tell the story of nature intertwined with emotions. Its melancholic, angry, soothing and blissful; Journeys in Solitude is amongst the better Gothic/doom metal releases of 2018. The loud production does justice to the heaviness of the lyrical content and the slow pacing of the songs matched with the mellow and harsh contrasting vocal tones makes for a memorable and pleasant listen. I’m not surprised there isn’t more talk about Journeys in Solitude thanks to over-saturation which has aided in the diminishing of metal's value.

Traces of the sepulchral odyssey: