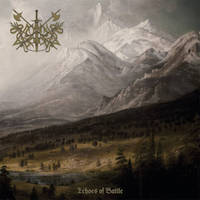 When I was first approached to review Caladan Brood's Echoes of Battle I was quite anticipatory as to what brand of atmospheric 'black' metal I might be in for, especially when I saw Summoning mentioned in the press release. I tend to not allow such comparisons to influence my opinions one way or another; after all, how many bands cite Venom or Bathory as an influence and are nothing short of laughable? That said, this Salt Lake City duo is nothing to be taken lightly or to find laughable in any sort of capacity. This is already going to be on my Top Ten list at year's end, that's a given.

Using fantasy literature as a template for the music, members Shield Anvil and Mortal Sword manage to create some of the more fantastical and introspective music this side of the foggy din of a Swedish mountainside. The ambiance created with the stupendous keyboards is absolutely breathtaking when taken in within one long inhaled breath only to exhale the wonder and cold that is history's wondrous lineage of swords and battles atop a frozen tundra of blood and thunderous armies marching into certain Hell. The images created within this music are second to none, reflecting all of the novels and short stories we metalheads ingested like candy as impressionable children. Two songs into this gem and I'm in absolute awe!

The only way to describe this collective is to say it's a release of epic proportions, yet I won't lump or file it in with other “epic” albums of similar slant because, frankly, the term is overused so much these days. What Echoes of Battle is and possesses is 70-minutes of a Steven Erikson novel come to musical life, drawing upon the texts of his work, Malazan Book of the Fallen. Every bit the magical piece of imaginative splendor, the orchestral visages of war that Caladan Brood produces are nothing short of sonic majesty; if it seems like an inflated fluff piece, I assure you, I tend to drift off during elongated tracks if the music doesn't hold my attention, but I found myself at the end of each track longing for more as my own mind formulates tremendous visuals of great battles and copious losses of life amidst the ruins of what once was. The mark of a truly great piece of music is to have its background and forefront linger in your head for long periods after it leaves the room. The Caladan Brood does just that, to a very high and precise degree.

The vocals are a throaty, yet concise blackened issuance, but there are brief and highly potent lapses into clean, large tones that are as bellowing and commanding as anything you've heard before in similar music. It's a wonderful style when implemented properly and carefully. To label this 'black' metal would serve to stultify the music that really delves out and beyond the reaches of the typical atmospheric Alcest-drenched music. The guitar and drum work can often initiate feelings of magical bleakness and tumultuous resolve in one measure, and that alone keeps me interested and enlightened. This is also the type of record that I simply can't break down track by track, as is my usual way of grading I suppose; but when I start hearing “To Walk the Ashes of Dead Empires” I find myself mentally wandering a battered and crimson-painted field of suffering and great pain as the music builds to a zenith so intense that I'm lost in the visuals my mind can't help but create. The album commences with the solemn, yet hopeful “Book of the Fallen”, bringing the album to its logical and necessary conclusion.

When you think of true 'battle-metal' or atmospheric metal music, I implore you to take this record and seal yourself away for a time. It will be well worth your effort., even if the thought of long tracks puts you off. You'll become so engrossed in what you're hearing and the pictures within your mind's eye that before you know it the phase is over and the pattern begins anew. This is truly a remarkable piece of work, and Caladan Brood is on my eternal radar. Watch for it in early 2013; you won't be sorry.

When did Utah become the new plains for raids of old?