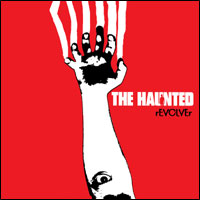 Aro's out, Dolving's in. With this line-up change, The Haunted began to derail, first slowly, but sustainably. Revolver, no doubt about it, is still a very powerful record with a lot of thrashing moments, but it also uncovers first signs of a less vehement method. And yes, due to an interview in a German metal magazine, I think it was Dolving who enlarged the musical spectrum of the formation. So here we find some psychedelic intermezzos, very accentuated singing and pretty weird sequences - but don't scream for the guillotine, an iron maiden or a firing squad, they remain exceptional. This album has not much in common with its crippled successor. Quite the contrary. Instead of delivering a bunch of immature weaklings, The Haunted throw some bloody pieces of meat into the crowd and they taste wonderful. (Vegetarians prefer "The Dead Eye".) Let me mention some examples in order to whet your appetite.

"Sabotage" is an outburst of energy, a raging force which cannot be stopped. The opener delivers the first explosion of spontaneity and impulsiveness and further tracks leave no doubt, that The Haunted reach their top form whenever they combine old school thrash riffs with an appropriate quantum of hate. High velocity is a very appreciated ingredient, but mid-paced tracks work as well. The malicious riffing of "Nothing Right" forms a real highlight. Dolving delivers his best performance on this album, he sounds passionate, angry and caustic. The rhythm section also does not come off badly. A stoic bass line and the dynamic drumming complete the picture. Furthermore, I must mention the rasping guitars and the venomous, intensive chorus of "99". Once again, Dolving's vocals play an important role and the catchiness of the track is remarkable. Yet all these brilliant pieces are both blessing and curse - they reveal the bad decisions of the band mercilessly. I am speaking of those decisions that led to tracks like "All Against All". In normal circumstances, this would be a pretty mediocre number, but in the direct neighborhood of "Sabotage", it is nothing but a powerless piece of shit. The break between these two songs is fatal. It feels like the change from a brand-new Lamborghini to a rickety bicycle. Enjoy your ride!

"Liquid Burns" starts the last rocket of the regular package, "Smut King", a bonus track of the limited edition, also praises the Gods of speed. (The second additional piece leaves a melancholic mood and its main melody seems to be borrowed by Forbidden.) The Haunted sound never awkward or clumsy, they act with the maximum degree of precision and this feature lends their fast songs the extra portion of sharpness and acidness. The clean yet inspired production is another factor that puts the good pieces in the right light. On the other hand, it also makes clear that "Abysmal" does not suffer from a shitty mix. Instead, it is just a weak composition with narcissistic vocals of a man who overestimates his charisma. Anyway, the advantages of Revolver clearly outweigh the disadvantages. Sad but true, this feature separates the album from each and every later work of The Haunted.

Just when I thought there was no more good metal to come in 2004, The Haunted return with original vocalist Peter Dolving for a new album that simultaneously kicks you in the gut and makes you stronger. rEVOLVEr is full-throttle thrashing pandemonium with aggression that is consistently relentless.

The return of Dolving is perhaps the greatest improvement the band has made, but the songwriting has also deftly scaled the walls of intensity by many levels since their last album One Kill Wonder. The darkly melodic delivery of the band is so well balanced that nothing of their past albums can really compare.

This disc is chock full of one instant metal classic after another. From the in-your-face gattling gun of “99” to the slower but equally destructive “All Against All,” The Haunted turn up the listener’s adrenaline levels and make you understand what is so great about the new face of metal.

rEVOLVEr offers dynamics that were never tapped correctly from the band before. Dolving’s smooth vocal intro and verses on “Burnt to a Shell” do a fantastic job of soothing the listener before kicking him into a ring of pit-bulls. Even the lyrics seem to have improved with a more philosophical approach. Not that one has much time for philosophical though with this aural onslaught, but it is one more tooth in this beast’s mouth that should soon be on the forefront of the worldwide metal scene.

The guitar work on this album may be more soft-spoken in the world of nerd-metal proficiency, but the riffing is nonetheless impeccable in design. Complimented by some of the best fitted drum-work of the year, this band can turn on a dime and even at a ninety degree turn make it feel like you’re running your fingers over the curves of a penthouse pet.

Last but far from least is the fact that this album has lasting power. It will survive repeated spins week after week, and as I’m just now discovering, month after month. Unlike some incredibly layered and deeply complex albums, you do not discover many new things after the fourth or fifth listen, but the dynamics and honesty of it all keeps you coming back. This is one of the year’s best.