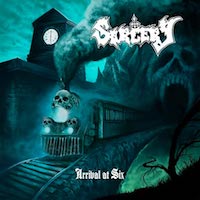 I'll go on record saying I think one of the better Swedish death metal albums back in “my day” was Sorcery's debut full-length, Bloodchilling Tales way, way back in 1991. It was absolutely rife with that “textbook” Swedish sound made famous by Grave, Unleashed and Desultory, to name a sparse few. While severely unpolished, it remains one I grab when I'm feeling that need for cold, unmitigated death metal.

That said, it's been, oh, two decades-plus since we've seen a full-length from these Swedish boys bent on bringing death to the lulled masses. Arrival at Six takes no easy way in and literally smashes into your ears with “We Who Walk Among the Dead”, a classic Swedish sounding foray into the horror that was that beautiful sound. Infinitely more polished with modern devices and tools, the primitive and thin sound of old is thicker and bolder, lending total credence to the notion that 20-years between albums hasn't dulled the senses of these guys. That sickening guitar tone, part and parcel with the era and region, is ever-present and as potent today as it was during that brutal period.

A band like Sorcery, one might opine, is riding the recent resurgence of that antiquated sound, and one might be correct. However, bear in mind that these guys once held rank in that esteemed club, and the time between hasn't exactly seen total dormancy. With a couple of demos and a compilation Sorcery has picked up where it left off and found a home once more in the dank and dismal recesses of death metal greatness.

The vocals are that familiar gruff bellowing, and it truly wouldn't resound well any other way. Ola Malmstrom sounds even more volatile and angry on tracks like “Master of the Chains” or “Warbringer” as he did on “Legacy of Blood” or “Death” back in the day. There is something so drawing about this sound, especially when done by masters of the genre like Dismember or early Entombed. Sorcery, however, claims its own spot in the pantheon of putrid perfection with Arrival at Six; this album, for all of its polish and tweaking, stands among the best of the modern day genre because, quite honestly, it's brutally effective at charging the blood in a mad rush through the body when hearing it. There isn't one weak track on here, and, surprisingly, not one track meshes into another with typical affinity towards repetitiveness. The signature sound remains throughout, but the tone of each song is different and equally heavy. “United Satanic Alliance” is just Swedish brilliance all over, reading like a post-Cronos Venom on a speedball diet. This familiarity is most welcome, particularly when it comes from one of the bands from the early movement that spread over Europe like a wonderful cancer, infecting and destroying healthy cells and decimating lives along the way. For once, such a metaphoric illusion works well.

I was ecstatic to hear that Sorcery was releasing the long-awaited second record; even with slight reservations and even fears in mind, I held out hope that the Swedes would know exactly what not to do when reclaiming a spot in the coveted history of that country's brilliant death metal underground. I was not only happily surprised, but doubly impressed and made subservient to a sound that I find most agreeable today with my old-world preferences.