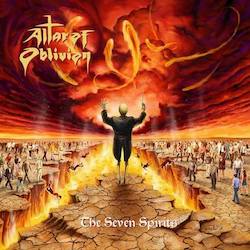 “No one left, no one left to see this doomsday prophecy”. Fuck yes!!, The very first time I discovered Altar of Oblivion by means of sheer luck, I could not quit spinning Salvation; such a masterpiece of on EP, and still that's not saying nearly enough about the scope of its musical accomplishments. After being blown away by just how authoritatively Salvation took the genre with its direct unhindered tone of ominous fore-telling, I had to have more. Got my hands on a copy of Sinews of Anguish and I was officially addicted. Now in 2019 they return to forecast more prophecies of doom and gloom.

What was it about the early releases that caught my attention and enlisted me a part of the Altar of Oblivion legion? The dreary, gloomy, pessimistic yet rebelling tone of the bands work, and specifically front man Mik Mentor's voice. His vocal delivery always sounded like a wise haruspex from beyond, forecasting inevitable dread and despair. It was always the highlight for me on the previous albums alongside the impressive guitars and drum compositions; and I’m more than pleased to say that the ominous sound of his vocals makes a triumphant return on The Seven Spirits. Matched with instrumentation that collectively structures the ideal scenery to go along with the apocalyptic lyrics, Altar of Oblivion have once again demonstrated why they are worthy of being regarded as a modern epic doom metal maelstrom. All aspects that were loved on previous releases return with fist pumping and sword wielding glamour. Guitar solos that will spoil the ear canals of any listener, drumming that hits like a numb handed heavyweight boxer, and a vocal performance that calls for a trophy and a cape to be placed over the capable back of front man Mik Mentor.

How’s the music? The same gold standard is applied to the musicianship featured on The Seven Spirits ensuring the listener will get a high level of addicting hooks, guitar solos, drumming and of course, vocals. All that you have come to acquaint Altar of Oblivion with and expect from, is proudly displayed in prime form. It's as if listening to a part two of Sinews of Anguish with a step up in the production value. It's evident as Mik’s voice and in particular the guitars come to front from the inception of the first song. His vocal range seems to have 1+ everything in the past. Tracks like “No One Left”, “Solemn Messiah” and “Gathering at the Wake” seem to have taken much advantage of this enriched production by highlighting vintage aspects of the unit. Those soaring vocals of Mik, matched with the catchy guitar leads and groovy punchy drumming, cooperatively makes for a sensational record, further carrying the name of Altar of Oblivion through the golden halls of epic heavy doom metal.

Mik’s vocals have that ominous admonishing tone that really sets the band apart from others in the genre. And the songs are constructed in such diverse patterns that apprehend the essence of epic doom metal, still he is able to adjust his vocal highs and lows when executing his archetypal technique as heard on “Seven Spirits” and the likes of. There are no weak songs on The Seven Spirits, as one would guess by now, it was enough of a challenge searching for the standout track when they all perform exceedingly well. Not a moment of needless filler, the work on here is purposeful; supporters of the genre and band will never be greeted by any bromidic moments. The songs translate emotions at high accuracy, Altar of Oblivion has never failed at this and here that trait is put on display and kept for the entire journey leading to the doomsday.

These Denmark based epic heavy doom metal lads are without a doubt sharing the spotlight with some of the best the genre has to offer, and with the release of The Seven Spirits their stronghold and presence in the genre is profusely magnified. Don't be surprised if The Seven Spirits appears on multiple "album of the year" list with a high ranking. Altar of Oblivion have outdone themselves once again.