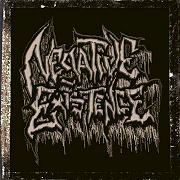 Death metal of this sort found on American soil usually falls into one of two categories. Usually the first type is bland, oversaturated death metal that is too thin sounding to be taken seriously with a production as sheer as wax paper and no true grasp of the concept. The second brand of death metal is a thick, battering brutality that simply pounds your skull like a malfunctioning trip hammer and flips the switch in your head right off the bat. Arizona’s Negative Existence is the sole purpose my head is dented and bruised today.

With a drum-beat sound straight out of Malevolent Creation, guitars from the Broken Hope school of death, and vocals that make Craig Pillard appear subdued, Enshrouded Perdition casts a very heavy shadow over the room; 22-minutes of shameless disfigurement by way of audio transmission seem like hours as one track after another disassembles your thoughts and provides a sick and twisted jaunt into caustic nausea. “Using Fear as a Motivator” is something that sounds straight out of the early 90’s underground, especially the riffs that simply sound deadly and the musical equivalent of decay. The guitar tones over the “Lashing out against your condescending tone--/Lashing out at your motives to control-“ are some of the more evil and sadistic sounding I’ve heard. The whole demo provides a serious look downward into the sewage of the human condition.

What impresses me most about Negative Existence is that fact that there is no pretense, no overuse of shock as a weapon; there is a simply battery of dark and violent chords melding with a drum sound that is fast, nicely crisp throughout, and just angry enough to cause small ripples of anger at pretty much everything around me. That right there is what death metal is supposed to accomplish, and this demo does that and then some. This music is as ugly as it gets with some of the better production values to boot; you need to seek out this death metal filth.

I hope these guys keep going in this vein.