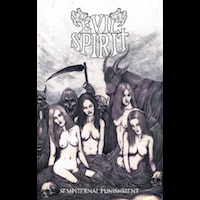 Germany’s Evil Spirit is the audio equivalent of someone taking a slow razor and drawing it horizontally across your back, only to shift direction and cascade the same blade vertically throughout the entire demo’s length. Once the makeshift crucifix has been affixed to your body in deep red and black you may only then employ all of the sadism and low-fi simmering that these three songs offer.

The Obsessed, Cathedral, Reverend Bizarre and of course the Birmingham four come to mind when delving into Evil Spirit’s first demo. If you wish to get even more modern, try and imagine a Procession album with some ‘jolt’ to it. With a vocal pattern so schizophrenic and throaty that it’s unlike anything in the doom genre this debut demo is a nice change of pace from the normal Sabbath-worship I’m so accustomed to with this doom ‘comeback’ of sorts. The thick, familiar tone is just fuzzy enough to appeal to the longtime doom fans of the 70’s and glazed with just a small amount of prog to appeal to the layman not easily impressed with typicality and patterns in the ivy. “Infectious Worms” is an incredibly traditional slab of doom that is catchy and will definitely stick in your head for a while. Those vocals are the most resonating part to me, but as a whole the demo is really well done and produced quite nicely.

Without a complete genre overhaul nothing these days can be like hearing Black Sabbath for the first time like most did on January 13, 1970, but for the modern day this duo fascinates and permeates just fine. I’d like to hear more of this in the future so here’s hoping, guys!