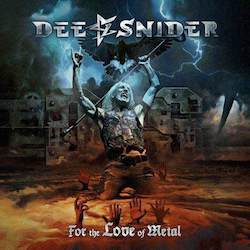 Type: Full-Length
Release Date: July 27th, 2018
Label: Napalm Records
Genre: Heavy
1 Lies Are A Business
2 Tomorrow's No Concern
3 I Am The Hurricane
4 American Made
5 Roll Over You
6 I'm Ready
7 Running Mazes
8 Mask
9 Become The Storm
10 The Hardest Way
11 Dead Hearts (Love Thy Enemy)
12 For The Love Of Metal
MetalBite on YouTube
MetalBite on YouTube

What do you get when you cross some old school traditional metal, one of metal music’s most powerful and recognisable voices and some modern metal?  You get something that is completely unexpected, and loaded with class.

Dee Snider, leader of the infamous 80’s cheesy rebellion Twisted Sister and vocal Titan, can anything else be said?  When he is joined by some of modern metal up-an-coming musicians on a bit of a challenge, the planets and stars started to fully align – metal started flowing resulting in the album For the Love of Metal.

The album sounds crisp and tight – but has some issues at times delivering some low-end power. Mr. Snider shines throughout each and every track despite the limitations of the songs he was doing. Songs like 'Become the Storm' and the duet 'Dead Hearts' (with Arch Enemy’s Alissa White Gluz) are stand out tracks. There were songs that were very rushed, lyrically repetitive and simply sounded all alike that brought the album down into a pit of mediocrity despite Dee’s obviously totally brilliant vocals that carried the bulk of the album’s enjoyment.

Obviously, Dee did not pen the bulk (if not none) of the lyrics, as they were not cheesy fun like he does, just cheesy bad. If I were to rate on Dee Snider’s vocals alone, it would be a solid 9 mark with the rest of the band being young and not even close to being as seasoned as the Twisted Sister frontman is. It brings the album down t a level that is disappointing to all of us, who use to laugh at TS, while marvelling at Mr. Snider’s power.