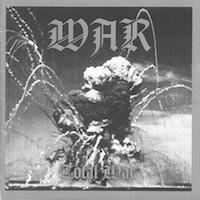 War, Total War. My homeland has made bad experience with a total war. But Sweden is the European country with the longest period of peace. Thus, some dudes from Stockholm thought it would be a nice idea to use these names for their band and the debut. Well, Dr. Goebbels said that "total war is shortest war", and the guys from Sweden are aware of this dogma of Germany's most hated propaganda minister. Their kind of total war lasts only 17 minutes - and even this is too long. It is rather a caricature of a war. I am sure that their parents were posers, otherwise this output would not suffer from this blatantly stereotyped wording.

Total War is primitive. Nothing else. People without taste may call it raw, aggressive, brutal or whatever they want to call it, but it is exclusively primitive. The first line of the first song is "Aaah, we are fucking war". Let me summarize: War, total war, fucking war. The totally unholy trinity of war is, of course, completely satanic, provocative and shocking. Too bad that this martial triad cannot compensate for compelling riffs, stirring leads and precisely designed like the opener "Satan" (another very subtle title) do not score with straightness. Their main feature is the absence of all that makes metal usually interesting. Okay, the band tries to deliver a minimum of diversification while changing the tempo during the following tracks. Yet this alone does not push the dudes on a higher level.

Despite the famous band members, Total War sounds amateurish. Just listen to the awkward fade-out of "Reapers of Satan" (yes, the fanciful song titles are the result of a long decision-making process). Death / black metal can be very exciting, and I think that I do not need to mention names like Necrophobic in this context. But Total War does not offer any fascinating riff and nothing leaves a long-lasting impact. Okay, maybe I want to make an exception. "I Am Elite" delivers a very rare asset, a modicum of melodies. I don't hate straight compositions, by no means, but I shit on noisy clumps. Furthermore, the name of the song is misleading, "I Am an Idiot" would have been much more correct in view of the fascist lyrics. Nevertheless, this marks the only track with a more or less gripping chorus and a pretty reasonable structure.

The mediocre riffs of the title track, the stupid hammering of "Revenge" and more or less any other detail tell us that the musicians spat out semi-finished songs which seem to be composed and recorded in less than two hours. And this is exactly what makes me angry. The faceless production is not worth mentioning and to be honest, the same applies for this parody of an extreme metal album. Five guys just play the brutal clowns. Give peace a chance.