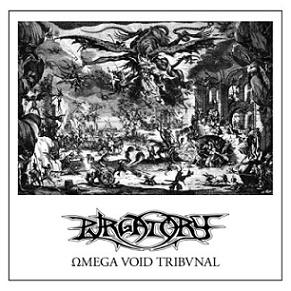 Germany's Purgatory have been around since 1993, and in all those years they have unleashed various full lengths that were not always consistent in style. On their first albums they were your typical mid 90's death/grind band, Deicide meets Impetigo meets Morbid Angel, a recipe they held on until 2004's Luciferianism. On that album the grindcore influence had to make place for more sturdy, traditional death metal, kinda Vader meets later Behemoth, and this until the album I'm reviewing here.

Here the band's sound has taken on a darker, slightly more atmospheric edge and it actually really suits them. Sound wise Purgatory have gone deeper into the Behemoth/Belphegor realms of extreme metal (with dashes of Nile thrown in) but they also reference the more underground breed of black/death metal bands like Nexul or Lvcifyre. The band has pulled up a utterly massive wall of sound here, where the percussion collides with the menacing guitar tone and the brutish vocals to earth shattering effect. Sporadic slower, heavier parts have been worked into the compositions while swathes of haunting keyboards and spoken word parts help establish the atmosphere where the band without doubt was aiming for. Unfortunately, sometimes even to undesired comical effect. The words "let my people go", spoken not entirely without accent, in 'The Curse of Samhain, pt. II' brought back memories of an episode of "The Fresh Prince of Bel-Air". The malevolent nature of the music let's you forget such minor flaws in an instant though.

Please allow me to make a mention of the stark black and white artwork and layout as well. It supplements the music well and the engravings in the booklet set the mood perfectly for the pulverizing music contained within.

With this album, the band have reinvented themselves and fit effortlessly into the current state of underground extreme metal and this without coming across as forced in any way. That's no mean feat and there are plenty of other bands of Purgatory's generation that can not make that same claim. Hell, there's even way younger bands that can't even make that claim!