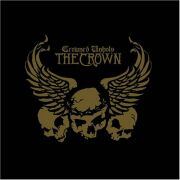 Type: Full-Length
Release Date: 2004
Label: Metal Blade Records
Genre: Death, Melodic
1 Introduction: House Of Hades
2 Crowned In Terror
3 Under The Whip
4 Drugged Unholy
5 World Below
6 The Speed Of Darkness
7 Out For Blood
8 [I Am] Hell
9 Death Is The Hunter
10 Satanist
11 Death Metal Holocaust

Perhaps one of the coolest things in the history of ever has just happened: a few years ago, The Crown unleashed one of the greatest metal albums ever, Crowned in Terror, now, one release and a couple years later the band posthumously releases Crowned in Terror again with the band’s original vocalist, a few revamped pieces and a much better sound engineering. Crowned Unholy is that equally stunning work.

You read correctly, the word is posthumously. Of course I mean the ties that bind, not the band members themselves, are dead. For me, the fact that The Crown decided to split was perhaps one of the most depressing pieces of metal news to hit the scene in the past year or so. And you should be crying too if you missed out on this underground legend. Stunning guitar work, the songwriting sensibility of a rock ‘n roll god gone mad and vicious vocals that could trounce the best of them are foundations of The Crown. For you newbs, think melodic-death like The Haunted, but even better.

When Crowned in Terror came out initially I pretty much crapped my pants. The Crown had picked up legendary metal vocalist Tomas Lindberg (At the Gates, The Great Deceiver) and simply destroyed. After a tour in the US and some unfriendly drunken incidents, Lindberg was replaced with original vocalist Johan Lindstrand. The band recorded Possessed 13 and decided to call it a day. But it wasn’t quite the end, because The Crown opted to go back and re-record (note: not re-master) Crowned in Terror with Lindstrand.

Really the result is something like the re-releases of the original Star Wars movies. Crowned Unholy is newer, it’s smoother, it’s got cooler tricks, but it’s missing a little of what the rawness of Crowned in Terror provided. Some people can easily name one album over the other in preference, but I can’t. I love ‘em both. Take the new version of “Speed of Darkness”: I like it better than the original. On the other hand, I like the original version of “Satanist” a little better than the Lindstrand version. And this, folks, is precisely why this is one of the coolest things to happen in the history of ever. A superlative of an album was released twice, and twice it destroys all. Long live The Crown.