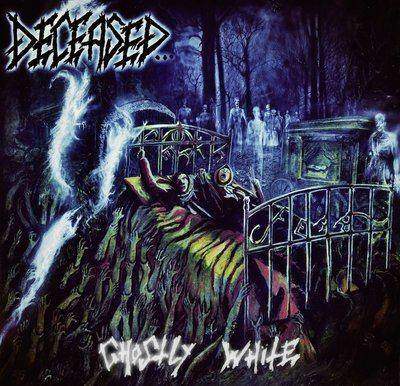 Deceased perform a form of death metal that is heavily influenced by old school acts, but brings modern presence to the table. There is the theatricality of a King Diamond release combined with the old school death metal of a Dismember or Entombed album. The entire thing is very colorful.

There are a number of guitar riffs present and these are always performed as magnificently as possible. The album gets its groove on numerous times throughout these songs. One gets the impression that an old school album is distilled into a more modern framework with this album as it goes along. As this death metal feeling is created it is thrown into the context of a concept album like King Diamond does. This makes the entire thing more epic than it would normally be and adds to the appeal of the work. The album isn’t perfect, however. It is one upped by the theatricality of King Diamond at times and the death metal has been performed better as well. While it might not be the perfect death metal record, there are so many things to like with this release that you won’t help but become attached to it. If the band brought a more modern production job to the mix and made this have more impact it would be even more viable.

As it stands, Ghostly White is a classy old school death metal release that has some slight thrash tendencies here and there. It comes recommended to fans of the band’s previous material as well as those that like their death metal given an epic and riff-centric feeling to it. This album does have an atmosphere and it adds to the ghostly nature of the album. When all is added up, we have a strong album on our hands.