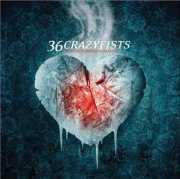 Type: Full-Length
Release Date: 2004
Label: Roadrunner Records
Genre: Hardcore, Melodic
1 At The End Of August
2 Heart And The Shape
3 Bloodwork
4 Kenai
5 Skin And Atmosphere
6 Song For The Fisherman
7 With Nothing Underneath
8 Destroy The Map
9 Installing The Catheter
10 Cure Eclipse
11 Waterhaul

36 Crazyfists are not a metal band. This isn't coming from an elitist metalhead here either, rather the band's record label Roadrunner. According to their bio, they are a part of something called the "post-hardcore" movement. Whatever you want to call it, 36 Crazyfists' sophomore effort A Snow Capped Romance is a generic but undeniably catchy album.

When I initially put this record on, I found myself having dreams of tearing this band a new one with a no-holds-barred hate-filled rant of a review. On the other hand, I have never been one to turn my back on a melody and the surprising truth of the matter here is that A Snow Capped Romance is just exploding with them. Post-hardcore, as I have come to understand it, is hardcore with a heart. Heartcore... hmm... that has a nice ring to it and as corny as it all sounds, it is infinitely more appealing to me than the dry and tedious hardcore of the norm.

The vocals here do a constant balancing act between soaring clean lines and hardcore screams. Remember that band Alien Ant Farm that did the Michael Jackson cover of 'Smooth Criminal'? Well, this singer sounds a little like him when he sings. Is that a bad thing? I don't think so, however, sometimes I find myself chuckling over the similarity. Again this isn't metal so don't expect to hear anything traditional vocally.

The first line of this review probably weeded out the majority of people who will have a problem with this release. If you are a fan of heavy music and can see yourself singing along to some emotional hardcore, then 36 Crazyfists are for you. If not, then stay as far away from this band as possible.