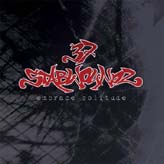 Type: Full-Length
Release Date: 2004
Label: Garden Of Exile Records
Genre:
1 Deadly Force Action
2 Flesh and Blood
3 The Die Is Cast
4 Vendetta!
5 Blade in the Chamber
6 Where Do We Go from Here?
7 Save My Soul
8 Breathing to Expire
9 Indisposed

The trouble with writing and producing music today is that it’s difficult to avoid throwing something out into the world that isn’t necessary. How many albums get dumped on us a year? A ton. How many of them should be kept around? Certainly not all of them. The Netherlands’ 37 Stabwoundz is yet another band that borders on the edge of importance in today’s music scene. Their debut, Embrace Solitude, while technically and musically sound, isn’t quite able to support itself due to the nature of the music.

What we get from 37 Stabwoundz is thick, crushing riffs with a nice, meaty production and full sound, good songwriting that brings the ideas together and avoids tedium… that’s about it. It’s good, it really is. Those are all strong qualities needed in a band. But what if the music itself doesn’t hold enough creativity and ingenuity to warrant repeated listens? Or if the music, though not plagued by any inherent errors, doesn’t bring anything new to the table and other bands before have done it better? That’s the biggest issue with Embrace Solitude.

37 Stabwoundz have a constructed a fairly sturdy album in Embrace Solitude, albeit quite redundant as to what we’ve seen before. The shelf life is high, as it’s certainly not an album that’s going to warrant many repeated listens. It all comes down to if you have any more room in your life for the Pantera/Machine Head style of metal. I’d wager not.