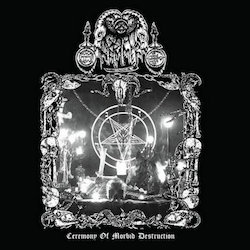 If you’re a fan of the black/death metal underground scene, and are easily drawn to the ugly vocals, sharp riffs, primal drumming and raw production that comprises most of what exists there, then Goathammer’s Ceremony of Morbid Destruction will satiate your appetite. Though those elements are all featured on the record, there has been a considerably high amount of improvement by Goathammer in the song-writing department since the release of XIX Pentacles, XCII Legions... in 2014 and their self-titled demo in 2016. Those first-fruits were unambiguous to some extent given that they were rarely caught flirting with other influences. The 1st and 2nd wave black metal framework mixed with a considerable amount of thrash metal rarely left room for interference by external genre defining additions, even with the small hints at epic doom metal, the record was still overwhelmingly driven by 1st and 2nd wave black metal. Ceremony of Morbid Destruction takes a rather confident step in re-imagining the Goathammer sound by adding longer segments of black/death metal and a couple of squeezed-in surprises. However; the band’s early thrash metal and black metal tendencies are still evidently dominant on this latest recording, as can be heard from the first track titled “Arcane Destruction Spell” and the following songs.

There is one noticeable difference occurring between the “Arcane Destruction Spell” and the rest of the record. That which happens to be a suddenly heavier/denser sound bass-wise as it was not the case from the beginning. Not sure if that was a recording mistake but the contrast can be identified with ease. That slight change in audible clarity came as a welcome one as the now discernible bass seemed to have given the record that oomph it needed. There’s a surprise riff at the 3:14 mark of “Invoking the Sadistic Spirits” that echoes the one of the leading riffs on ”The Scream of the Iron Messiah” by Black Death (USA) on their 1984 self-titled record; not sure if it was used as a nod the vets but it certainly was a smooth lick to hear in a different genre. Ceremony of Morbid Destruction takes a break from the speedy path for some mid-paced catchy grooves and epic moments that can be heard at the closing of “Perverted Blasphemy”. Vocally there seems to have been a small change whereby the barks now appear more fitting for the”war metal” style of drumming that has existed throughout the band’s history but now flaunted more conspicuously with the aid of war-like structured riffs. The drumming and guitar riffs fit together like bullet and chamber, the intensity of both elements clash conveniently, thereby serving a sick secretion of scorn. And with a louder mix to each instrument you get a heavy blast of Goathammer’s flourishing fury.

Lots of bands come to mind upon hearing Goathammer’s Ceremony of Morbid Destruction. There’s the previously mentioned Black Death along with Bathory, Inquisition (Colombia) and a fair bit of Goatpenis, Satanic Warmaster and Goatmoon. Thus said, it’s hard to go wrong with this one, as there is something bound to appeal to most lovers of extreme underground black/death metal. Being signed to Hells Headbangers Records, Ceremony of Morbid Destruction is the ideal way to give a favorable lasting impression in terms of a full-fledged debut LP.