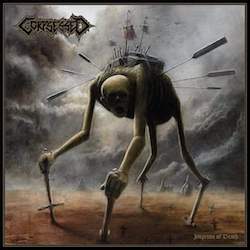 This is one that took me a while to adjust to, but upon giving the time to sit and absorb the scaling and pounding trample of Corpsessed’s second outing titled Impetus of Death, I was made aware of how good they are. Musically the band excels at delivering a stabilized performance that beats down on the guitar riffs with boulder-esque power chords, double bass and bellowing vocals. I think Corpsessed achieved a special height with Impetus of Death, though I have yet to hear what came before this, Impetus of Death sounds like a force of its own making.

Clocking in at 47 minutes, Corpsessed reveals that they are not afraid to diverge unto other paths with a sanguine stride each time they do so. 47 minutes is more than enough time to make a bland dragged-out record, as we have seen with many bands; however, if you have a clear vision of where you would like the band to be by the end of the recording and are able to build a climax going into each track then it is more likely that you will be successful with the finalized output. With riffs that act as an extension of the monstrous sounding vocals, bass and drums, the grip is fastened on the listener with the assurance of sustained replay urges. And with each new session, the job of scrutinizing the release transforms into a head-banging, indulgent stretch. If that’s the case at any period of time, then the record you are listening to is a success.

From the title track to “Paroxysmal”, “Forlorn Burial” and the mammoth stomping “Starless Event Horizon” you're greeted in one of the most austere manners imaginable. Death/doom and thrash metal rotate the attack whilst pelting out riffs that accolade the fierce assault of the emphatic vocals, bass and drum quarrels. The devotion towards death metal radiates brightly through the recording to be heard on here. Though the mix is at times a bit tough on the ears (especially if wearing headphones), you cannot disregard the fact Impetus of Death carries with it an addiction that builds as time progresses; and with that happening you don’t even recognize the minuscule flaws when they appear. Example, “Starless Event Horizon” is a 10 minute track that offers an intense stir of death/doom, it's not perfect as some parts could have been played with a bit more consideration, however, as you approach the 3 minute mark and hit that tremolo guitar lead, it begins to make sense structure-wise. By taking a less memorable opening and adding a peak via introducing a catchy lead you somehow recreate the song by giving it a stronger highlight. “Starless Event Horizon” is an excellent conclusion to a record which connects each link, thereby creating an anchored representation of the final product.

Interbreeding with the metaphysical: