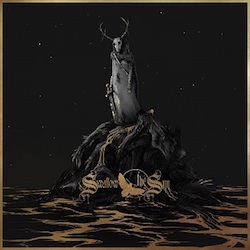 Type: Full-Length
Release Date: January 25th, 2019
Label: Century Media Records
Genre: Death, Doom
1 When A Shadow Is Forced Into The Light
2 The Crimson Crown
3 Firelights
4 Upon The Water
5 Stone Wings
6 Clouds On Your Side
7 Here On The Black Earth
8 Never Left
MetalBite on YouTube

There's a certain emotion that very, very few bands are able to instill in me - a sense of pure wonder so powerful that I'm forced to drop everything I'm doing and just listen to the music in awe. It's the same profound fascination I get from staring at the stars in a night sky, a oneness with nature and the world around me. It makes me ponder existentialism in the best way possible, filling me with determination and reinforcing my goal to make as much of my life as possible. Since we're so insignificant in the grand scheme of things, we can forge our own purpose and get as much fulfillment out of our short time on Earth as we can. Ultimately, it makes me grateful to be alive.

Paradoxically, the only record to come out of 2019 that's evoked that feeling in me is probably the darkest of them all. At its core, the album is a harrowing expression of the emotions which followed the death of main songwriter Juha Raivio's wife. However, that's not all there is to it. Abounding despair shrouded every moment of the conception of When a Shadow is Forced into the Light, but rather than embrace the hopelessness as so many other doom acts would, Juha created the album as, in his own words, "a weapon for myself, a burning torch, victorious and proud." So that's what this is really about. It's fighting back against the shadows that surround you, it's finding the hope in despair and the wonder in bleakness.

As personal of a concept as that is, though, it wouldn't have meant anything if it hadn't been executed well. Luckily, 'well' doesn't even begin to cut it here. The instruments create an otherworldly atmosphere unlike any other I've heard before while the lyrics create emotions ranging from despair and resignation in the brutal title track to the aforementioned existentialist wonder in 'The Crimson Crown'. The vocals are brilliant all around - Mikko's blackened screams convey pain perfectly while his more mellow cleans can express a range of feelings, from solace to acceptance to longing. The guitars provide a strong foundation, a constant source of melody but also impactful heaviness. They control the pace of the album, either driving it forward or slowing down to allow moments of introspection.

Additionally, the lower end is really given room to breathe and shine. There are several sections where the guitars completely drop away and allow the subtle synths and bass to take the lead. As seems to be a theme on the album, this element is used in incredibly varied ways. The quiet sections in 'The Crimson Crown' immerse you in a strange fantasy world; it feels expansive and makes me ponder the infinite reaches of our cosmos and what wonders there are to be discovered out there (an effect added to by the lyrics which tell a fantastical creation story - in fact the chorus of this song is where I first felt that profound, enlightened awe I mentioned in the introduction). This couldn't be more different from the quieter parts in 'Firelights'. These are flawlessly designed to invoke unease, combining distorted bass, whispered vocals and the subtle integration of a bell tolling. It's once again completely unworldly, but this time you're not entering an oasis of wonder, you're trapped on an island in an ocean of nightmares. This world has only ever known bleakness and death, and it's up to you to fight back. To find the firelights.

Ultimately, I could sing this album's praises all day. I could dissect the meanings and subtleties woven into every track, but that'd make the review too long. There are highlights everywhere, too many to list, and the experience is in equal parts intensely heartfelt and painfully harrowing. The style stays consistent throughout, but new elements are added just often enough to keep it varied, my favourite examples being the cellos and violins that come in on 'Stone Wings' and the uplifting narration that ends 'Clouds on your Side'. I'll be honest, the latter track had me in tears by the end. A softly spoken passage in the language of romance, a reassuring message of perseverance written by Juha's wife... it's beautiful. Here Aleah Starbridge's soul is living on through her words, shining radiantly to give her lover the courage he needs to face a world without her. Death may be stronger than life, but love is stronger than death.

Before now there were eight metal albums I'd ever deemed worthy of a perfect score. I've just found the ninth.