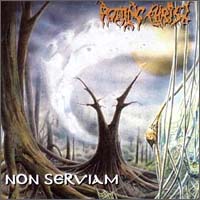 After the release of the historic Thy Mighty Contract, Rotting Christ composed the album that granted them some fame in the underground of the 90s, Non Serviam. The main difference between the debut and this second full-length work of theirs is the enriched sound, which is the outcome of endless solos and the extensive use of keyboards.

The aforementioned solos are the main element that was missing from the band's debut. And they are actually the most noticeable characteristic of this release, being clever and enjoyable, especially in the second half of 'Where Mortals Have No Pride'. There is also a general leaning of the band towards more complex songwriting, with interesting lyrics and constant changes between fast, aggressive parts and more slow, nostalgic ones.

Despite the important improvement in the guitar section, there is still a lack of potential and essence. A dull background which is still present in every song and which is even more remarkable now, with Sakis sounding like a Greek teenager with a bad accent (saying isons instead of icons) trying too hard to be evil. In addition, there are parts where the keyboards sound completely unnecessary, the title track being the most typical example. The drums add to the poor quality, since they seem mechanical, almost as if the band added them in the end just because they had to.

This whole album is proof of the wrong perception the band had of themselves at the time. Instead of investing in what they were good at, which is basically atmosphere, they composed wannabe black metal songs which might be pleasant to listen to from time to time but unfortunately all end up being biased. In the end, Non Serviam leaves a bittersweet taste after listening to it. It does not really appear to be a bad album but rather a continuation towards a wrong path and a trap, from which Rotting Christ thankfully escaped with Triarchy of The Lost Lovers.