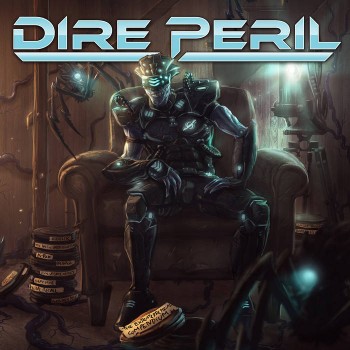 What we have here is a nice combination of power metal and thrash, two genres that aren’t combined often. The outcome is a sound very similar to Demons and Wizards, but fret not, this band does enough to separate itself. The thrash component of the band gives the album the type of impact that most power metal albums are lacking. I still think the power metal component overtakes everything and makes for a very sweet sounding listen.

This album is simply unique because not many bands have tried to combine these two genres in the same way. The songs have a charisma that is welcoming and makes it less cheesy than the typical power metal release. The riffs are very strong and powerful and always make for a gripping listen. If there is a flaw to the band, it’s that they are occupying the same territory as Demons and Wizards and thus have a lot to live up to. Despite sounding similar to that band, they are able to elevate their sound. Also, the songs begin to sound the same, even with the added acoustic sections and other portions to vary things up. This is still one of the better albums of the year and cements its place nicely in a very fresh and uncharted genre. The brilliant idea of combining power metal with thrash comes to full fruition.

These are songs that are also full of bravado and have an epic nature to them. It all adds up to a very solid power/thrash album that has a slight focus on the power side of things. The Extraterrestrial Compendium is a very welcome addition to this year’s crop of music and makes for a galloping and fun listen. Fans of both power and thrash metal should find something to like here as will fans of Demons and Wizards.