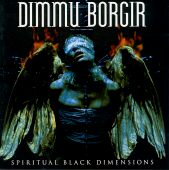 A first when I chucked this on release, from what were then, the undisputed kings of black magic, I was mildly impressed with Dimmu Borgir’s new album. Shagrath’s vox had improved, Tjodalv had improved his furious blast beats, and they have an Australian bloke handling lead guitars, namely Astennu, things may be looking up for Dimmu Borgir, they also had Mustis on synthesizers. Then I had to back up a few notches, I mean “what the fuck?!”, “they have Mustis on synthesizers”!?! What happened to Stian and his synthesizers? Dimmu Borgir in all their infinite wisdom had decided to eject Stian Aarstad and his synthesizer skills from the band.

Aside from those factors, I will endeavour to concentrate on the rest of this CD review. If it wasn’t Dimmu Borgir, this release wouldn’t be half-bad, but the fact is, this is Dimmu Borgir, and we all know they are capable of so much more. Really this CD does make me quite sad.

This CD is not quite in the vein of their two earlier releases, and diverts slightly away from the more symphonic side of black metal. Production is top notch, as you’d expect from the Abyss Studio and Peter Tatgren. Worthy of note on "Spiritual Black Dimensions" is that Dimmu Borgir have employed their first usage of clean vocals. Borknagar’s then bassist and front man ICS Vortex handled those duties. All things considered this ain’t a half bad CD, I just expected a bit more from this overly talented outfit.

Bottom Line: If you have the rest of the Dimmu Borgir albums in your collection, then by all means buy this one, but if you don’t then I recommend "Stormblast", "Enthrone Darkness Triumphant" or "Puritanical Euphoric Misanthropia". "Spiritual Black Dimensions" will probably turn you off Dimmu Borgir.