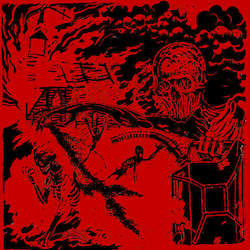 Carnal Records locate Wan between reputable gangs such as Aura Noir, Hellhammer and - as always - (early) Bathory. This categorization is right, while the simultaneous mention of Celtic Frost is rather misleading. Wan have not much in common with the courageous project of Tom Warrior, because they shy away from any kind of experiment. Instead, the songs of the Swedish quartet wallow in vice while revealing a very dirty approach and a nasty sound. The mix is inspired by the old works of Darkthrone, another band which is mentioned by the label. (I guess the dude who wrote this promo sheet is also the composer of Driller Killer's "In the Name of Namedropping"...) Fortunately, the rasping guitars have more power than those on "Under a Funeral Moon".

Either way, Wan do not reach the class of the aforementioned "idols". The combo's core competency is making noise, but exciting riffs are not in its focus. They appear occasionally, for example in the second tune. But honestly speaking, the riff sounds good, but not new. It has been offered by other bands many times before. Indeed, originality is written in very small letters in the musical spectrum of Wan, but this can be excused in view of the sub-genre that the protagonists represent. Homicidal black thrash is the natural enemy of innovation. Given this situation, one can say that "Out of Your League" marks a forceful number, not only because of its dynamic tempo changes. The same goes for "Fistful of Metal". Don't expect a cover version of Anthrax, this piece starts violently with galloping guitars, but a break after 50 seconds pulls the plug, because it opens the door for a pretty lame part.

The consistent one-tone approach of the so-called lead "singer" has the crude charm of brutality, but its monotony and uniformity also characterize his performance. Wan just fail to develop an own identity and that's a pity after three full-lengths. Five songs in less than 15 minutes speak volumes in this context. Black thrash has never found its fulfillment in overly complex or cryptic structures, but a little bit more substance could have worked wonders here. In short, the band does not lack integrity but convincing ideas and with regard to the fact that they are already active for ten years, I fear that they will remain on their average level. The challenge is to write songs whose impact lasts longer than their playtime. As much as I regret it, this seems to be an onerous task for Wan. This great country called Sweden has many better formations in its portfolio. But unlike Carnal Records, I will not drop a hundred names. You know who these bands are.