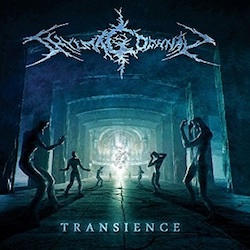 Type: Full-Length
Release Date: June 29th, 2018
Label: Napalm Records
Genre: Blackened Death, Melodic
1 Transience
2 The Dawn Of Motion
3 As All Must Come To Pass
4 This Shadow Of The Heart
5 The Chosen Path
6 No Child Of Man Could Follow
7 Journey Through The Fog
8 Life
MetalBite on YouTube

Shylmagoghnar's first album had a huge impact on my life. Within the first 30 seconds of 'I Am the Abyss', I knew I'd discovered something special, a new type of music I'd never heard before to dive into. With it, began a long journey into the far reaches of extreme metal; my current music taste was shaped almost exclusively by Emergence. So, as you can imagine, when I heard this Dutch duo had something new in the works, I was excited beyond words. But did they deliver?

Short answer: Yes, they did. Every desire I had for the album was completely satisfied and every expectation exceeded. The song lengths are much more ambitious than on their debut and the songs are less structured, which works perfectly. They've written each track to immerse you and take you on a journey, a trait especially apparent in the 12-minute opener, which progressively grows darker and darker before transitioning into a piano interlude that bursts into a final, uplifting verse.

While the songs are very far from technical (just like on the debut), Nimblkorg's instrumental prowess and dedication to his project can't be ignored; not only does he play every instrument, but he does so in a way which complements Skirge's blackened screams without outshining them. His songwriting also comes straight from the soul and leaves a lasting emotional impact on the listener.

The inspirations are also much more varied on this album than previously. While Emergence was more of a standard melodic death album with a dash of atmospheric black (which is still incredibly unique, just not as much as Transience), here the influences range from the Darkthrone-era traditional black metal present in the first verse of 'As All Must Come to Pass' to overwhelming atmospheric passages reminiscent of Darkspace's work in the instrumental 'The Dawn of Motion'. The other two instrumentals employ proggier techniques, which gives them a tone of exploration, like delving into an ancient ruin containing never-before-seen wonders. Combining all these elements with Be'lakor and Insomnium's brand of atmospheric and melancholic melo-death creates an incredibly unique sound unlike any other I've come across.

In fact I only have one single, very minor complaint about this whole release, which has to do with the production. On their debut, every instrument was crystal clear and easily distinguishable. Sadly, this isn't the case on Transience; everything seems to have been mixed at the same volume, leading to songs often sounding muddy (and not in an enjoyable way, like on Thrawsunblat's "Metachthonia", for example.)

Overall, Shylmagoghnar have seized the opportunity to mature their sound with their sophomore full-length, experimenting with proggier structures and elements and in doing so, creating a work as near perfection as it gets. I'll eagerly be awaiting more material from my now-favourite musical project and I'm incredibly excited to see where they take their sound next.