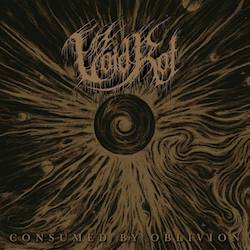 I feel Void Rot was given a cold shoulder, unfairly overlooked because of a saturated music scene. Had they been given the same coverage the likes of Spectral Voice or Krypts or even some meaningful spotlight, their debut EP, Consumed by Oblivion would have been the words on the tongues of many at the time of its release. I happened to stumble across them on The Metal Archives just by the thin chance of spotting the band name in the updates section and like all inquisitive metal adventurers I clicked. It'd be fair to say Void Rot don't have as many releases as Krypts nor Spectral Voice plus they arrived rather late to the scene, which could also be attributed to why there had not been much mention of the band. In addition, at the time of the EP's release and even beforehand, many had already grown accustomed to or even weary of the whole death/doom resurgence.

Usually I'm all for keeping things at a limit in favor of quality preservation as far as what enters my musical vault thus bringing me to the point of where and why Void Rot should share space within the same room more notable acts. Not to be mistaken, this is by no means a copycat band bent on riding the tidal success of this new wave of death/doom metal, in fact though carrying some elements of recognized bands of the genre in addition to those of Abstracter or even Cruciamentum, their methodology is more aching to that of a melodic one. Their musical palette is conservative from some perspectives; however, if you listen beneath the overshadowing hm2 pedal distortion you would begin to notice the lengths at which Void Rot goes to stitch together a sound and feeling that is somewhat independent and could manage well on its own.

'Ancient Seed' shows us how fluid they can write a song of trance-like effect whilst title track, 'Consumed by Oblivion' demonstrates the bands capability to drag the listener in and out of that state of mind with sudden bursts of guitar patterns adjacent yet still intrinsic to the general fabric and texture of Void Rot's blueprint. The d-beat drumming and vocal strength of the Ep empowers the daze these 3 sessions evoke, therefore causing the music to truly shine as a jewel of cohesion. A split with Atavisma is scheduled to be put-out sometime in February of 2020 through Everlasting Spew Records, hence it should be interesting to see how it is received and how Void Rot has progressed as a band since this EP. Let’s hope their effort is not 'Consumed by Oblivion' once again.