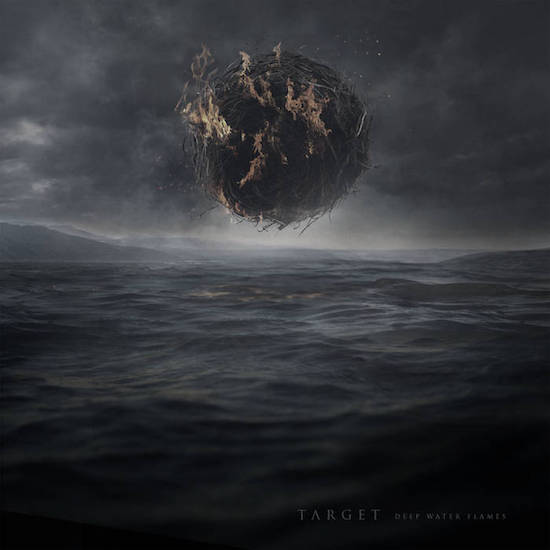 I've never tried tracking the metal scene in Chile, so wasn't really sure what to expect from this band. Target, according to Encyclopaedia Metallum, was created around 2002 and this is their second full-length album. Just bearing that in mind, the complexity level and technical skills on it is quite impressive. It moves in the area of technical death metal, but there are plenty of other elements that make it an album with almost each track having its own, unique atmosphere.

The album is just a little longer than 50 minutes, with 3 tracks being instrumental pieces - "Immerse" that is a kind of intro, "Submerged" being an intermission and "Emerge" as an outro. Those pieces are mostly calm and present an opportunity to let your ears rest from the mixture of various metal bits. The closest resemblance is probably Rivers of Nihil, which strike me the most when listening to "Inverted Gloaming" and reaching 2:00 mark. It can be also In Mourning or other death metal bands that have those more peaceful passages with clean guitars and clean vocals, or mixture or growling and clean vocals. During more lively passages you can hear a lot of things - progressive riffs in the style of Pestilence, some complicated rhythmically passages in the style of Meshuggah (similar style of growling/screaming to Jens) and I even heard some similarities to some passages with keyboards that The Gathering had on their "Mandylion" album. So, when it comes to style you can hear all of that plus quite a lot of disharmonies, reminding me of many bands that I recently started listening to - Harms Way or Letters from the Colony for example. The band also likes to create kinds of links between tracks by using slightly similar notes in riffs in two consecutive tracks, like "No Solace Arises" and "Oceangrave", but it only applies to the ending riff of the first one and the beginning riff of the latter.

Each track shows various influences and almost each shows various skills from each musician. Quite surprising that there are not that many passages exposing Rodrigo Castro's skills of playing on fretless bass. It adds to the reasons why my favourite track on this album is "Surge Drift Motion". I hope that it will be more frequent element that can be heard on future albums. Some of the tracks also have some electronic, ambient elements, but the variety of sounds that these 4 guys can produce using their instruments is stunning. Unfortunately I have no idea who's doing keyboards here, haven't managed to find that info, but also definitely did a good job on them being good addition and not taking over the whole song. And when you look at the album as a whole, all tracks have been put in the order to create an interesting listening experience when you listen to it in one go, with very interesting disharmonies closing "Random Waves" track, just before the outro.

The only downside of this album, which most probably is my personal view, is that my appetite for catchy riffs or solos is a bit bigger than this album can deliver. That's probably the only area where I'm missing the balance - most of the riffs are good, but they are mostly built on disharmonies, it's not supposed to make you hum or whistle the melodies, it's mostly creating uneasy atmosphere, even calmer passages sound as if you were watching some thriller and knew that they are there to let you know that another blast is coming, with the wall of guitars, drums and Andrés screaming his lungs out. "Inverted Gloaming" and "Surge Drift Motion" are definitely tracks worth checking out if you want to make a decision if it's an album for you. And if you feel like you're up for a challenge, give "Random Waves" a go, also quite strong position on this album in my opinion.

Generally solid material, with band showing huge potential for becoming quite important player in this subgenre. The production is also very good, no problems with hearing all sounds, no matter if it's some slower passage or blast-beats in "Surge Drift Motion". I know that I keep on repeating that some albums are good when listened to in whole in one go, I know that probably each band releasing an album is aiming for it to be one whole collection of songs that are good to listen to as a set, but this is definitely one of them, mostly because of building-up the atmosphere, increasing the amount of sounds blasting on your eardrums to gradually calm down and give it some rest. Big thumbs up for maintaining that kind of balance.