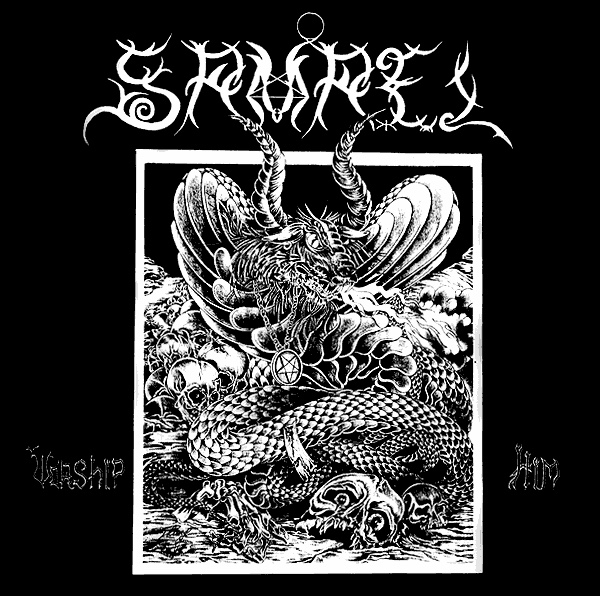 Samael have taken their listeners on a long journey. It began with Worship Him and it still has not come to an end. Nevertheless, it is already clear that their trip from a pitch-black debut to electronic, danceable sounds is remarkable. (Danceable for people with normal motor skills, not for me.) Unfortunately, the here reviewed album has nothing that deserves the aforementioned attribute. Frankly speaking, I never understood the enthusiasm for Worship Him.

The songs are lame, they want to be atmospheric, but they fail to create appropriate feelings. A crucial factor are the guitars, because they do not deliver outstanding riffs, massive leads or anything else that attract my attention. "Knowledge of the Ancient Kingdom" is the first track with a more or less enthralling guitar line, but everything remains fragmentary. The Swiss dudes deliver songs with breaks for the sake of itself, the song-writing skills are still in their infancy and memorable parts do not show up. I respect the musician's intention to create an album of pure blackness, but this does not mean that I like the result. For example, the lead singer tries to create tension at the beginning of the chorus of "Into the Pentagram", but the guitars sound sleepy and uninspired. Another wasted opportunity.

Maybe I jump to conclusions, but my geographically inspired assumption is that the guys were influenced by Hellhammer / Celtic Frost. This could explain why the band presents so many slow- or mid-paced sections, just think of some sluggishly creeping monsters of the legendary formation(s). But the total commitment to the eternal blackness is missing - or Samael are simply not able to express it. In hindsight, Vorphalack has used the word primitive to describe the record. I would not go that far, because Samael try to vary their tunes. However, they do not achieve the intended effect. Too many section just pass by, they remain faceless and taste vapid. The lyrics also fail to deliver interesting aspects. Buzzwords like "Cthulu", "Death" and "Pentagram" alone are not enough to create interesting poetry.

Few songs are pretty decent, for example the pretty fast and slightly horrific "Black Face" or "The Dark", an instrumental. It is more or less the only song with a good drive, a lively and powerful configuration and a tight interplay of guitars and rhythm section. Yet most pieces go hand in hand with the pretty flat production. The relatively powerless mix fails to give the unripe material a professional touch. The raw vocals are put in the right position, but the overall picture of the sound leaves me cold. In short, this album gathers dusk on my shelf, together with miserable works such as Master's or Immolation's debut ("Dawn of Possession" has an average of 92%? Are you kidding? No? What the hell is wrong with me?). Thank God, unlike Master or Immolation, Samael were still growing. Blood Ritual and in particular Ceremony of Opposites provide evidence.