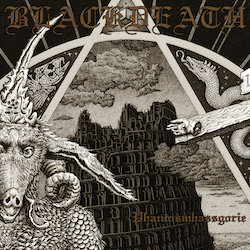 Russia’s Blackdeath has existed since 1995 but I've only happened to encounter them lately by chance. Having been quite an active sect of musicians in releasing 8 full length records with their most recent being Gift in 2015, they return with Phantasmhassgorie. Possessing no prior knowledge of the band’s older material, I decided to let this be my introduction to their music. I refused to visit older material, as I feared it would only swaying me from what this latest effort has to offer. Fast forward to the present, it turned out to be a good decision. Not only do I enjoy the music on Phantasmhassgorie, I also think the band offers a bit more than the same fatiguing black metal approach of the mid-90s. They truly sound as though an effort is being made to sound as diverse and distinguishable as possible, minus harming their sound as a black metal band.

What's striking with Phantasmhassgorie is the tightness of these compositions and the sincerity of the vocals. Colonel Para Bellum’s throats possess a rare blend of 1st and 2nd wave black metal, slightly similar to that of Shamaate of Arckanum and Izaia of Lamasy. Brushed by the technical grooves of the drum and guitar combination in both leading and bridging sections, Blackdeath have created a record that could deceive the listener into thinking Phantasmhassgorie was released in the late 80s. The more time I spend with Phantasmhassgorie the more I enjoy what is being delivered; henceforth strengthening the replay-ability. Songs such as the quick paced "…. ist Hass" and the title-track showcase a genuine understanding of synoptic black metal song writing techniques.

As good as the mentioned songs are, they're no match for my favorite track being “Hass in den Adern der Erde”, the longest entry on Phantasmhassgorie and definitely the best. It's beyond satisfying, hence possessing the ideal amount of technicality and groove to keep the listener interested in its entirety. Thus said, I think this is where Blackdeath truly excels, they are able to maintain that black metal aura all the while adding and replacing diverse styles. Second wave black metal drumming and landscapes are injected along with groovy mid-paced semi-technical sections that tear to shreds my preconceived notions of how the band might sound. I was preparing myself for ‘run of the mill’ 2nd wave black metal but was I wrong. I'm in shock as to how good Phantasmhassgorie is, I can barely move away from it without contemplating another spin; hence, it certainly can be placed amongst the titans released in 2019 thus far.

They're certain sections in which I can hear the bass guitar run alongside the leading guitars in creating that technical death metal tone that reinforces the semi-experimental aspect heard on Phantasmhassgorie. It's conspicuously presented in the slower segments as heard on “Durch den Wirbel des Hasses” and “Der Hass der Toten”. Adding to the spectacle of Phantasmhassgorie’s excellently executed technical and experimental aspects is the production that exerts a raw overcast canopy of sorts. Another aspect contributing to the success of Phantasmhassgorieis the chemistry shared among the musicians; I say this because all tracks flow so well, they don’t appear to be rushed at all, thus exhibiting an unhindered consciousness for each member's role/s.

Phantasmhassgorie is rather impressive as it should be given this is Blackdeath’s 9th full length album. There are so many little things implemented on the record that it’s difficult to feel bored at any point. Phantasmhassgorie displays pensive song structures even when not backing away from the idea of experimentation; I consider it an efficacious find for 2019. If you're open to the idea of semi-eccentric 1st wave + 2nd wave black metal, then Blackdeath's Phantasmhassgorie is one of the records you're most likely thinking of.