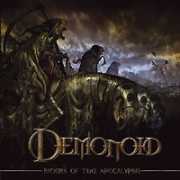 In the last few years there has been resurgence in old-school sounding metal projects, be it thrash, speed, or death. Demonoid play old-school death/thrash combined with some modern day metal elements. Three members of the band, Kristian Niemann, Johan Niemann and Christopher Johnsson come from the well-established Therion. The fourth, Richard Evensand, is the ex-drummer of Soilwork and the explosive Chimaira.

Let’s get to the point: Does Demonoid´s debut run through your head like a freakin’ bulldozer? Yes – and resulting in major damage. Riders of the Apocalypse has got to be one of the best death/thrash CD’s released not only this year, but in the last decade. It is fast, intelligent, fast, heavy, fast, technical, fast and originally fresh.

One could say that Riders of the Apocalypse is the follow-up to the mighty Ho Drakon Ho Megas, released by Therion in 1993. It could have been the bridge between this record and Lepaca Kliffoth, Therion´s best release. ROTA dabbles in some experimentation and little pieces of melody, but in the end it is still an all-out death/thrash attack that shows no compromise.

On this record, Christopher Johnsson delivers his best vocal performance ever. He has the deep, death growls and the screechy, blacker ones as well. Some thought he had forgotten to growl with the direction of latter day Therion, but this proves that notion wrong. The Niemann brothers do an amazing job behind their axes and Richard Evensand proves that he is one of the most entertaining drummers. Production-wise, if you liked the sounds on Therion´s latest double CD, you will love this, it’s exactly the same.

The first three tracks, “Wargods,” “Firestorms” and “Witchburners” show no mercy, leaving no one standing. The fourth song, “The 14th plague,” is the darkest and doomiest song on Demonoid´s debut. All tracks are real killers except, “The Evocation.” It’s not bad, but it surely doesn’t live up to the level of the other compositions. The other tracks are so good, “The Evocation” could be called the album filler. Riders of the Apocalypse is that good.

This CD stands above all the crap that has been released lately in every single metal genre. I hope we have more of the same from Demonoid in the future. I would even advise the Therion gang to stop doing their symphonic crap and focus on this assassin – metal as true and powerful as it can get!