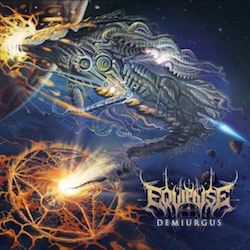 At what point does technicality become too much? I, for one, have not reached that threshold. Technical music has become by far my favorite and the crazier, faster and more technical it gets, the more I become intrigued by it, even if I don't always love it. Equipoise is a band that starts to push boundaries for even the most avid of technical music fans. Let's get one thing straight - it's very fucking technically proficient. It's almost mind bogglingly so. Everybody plays a million miles an hour, doing their own extreme acrobats, whether they're separate from everyone else or all in unison. It's unforgivingly manic, and from the moment you read the lineup of musicians involved, you should know you're in for a wild ride. I'd imagine it's a pretty controversial record; metal boomers are usually not fans of the genre already, so a band that pushes even this niched subgenre to its limits is sure to cause debate over whether it's decent music or not. I've been listening to it on and off since its release, and it's actually surprisingly good, but not perfect or game changing.

"Demiurgus'" core sound is quite simple; take a little bit of every tech death band, put it all into one, and there you go! Although, some influences shine brighter than others, the most noticeable being the more progressive outfits such as Obscura and Beyond Creation. That being said, for as technical as this album is, it's not that progressive, not in the sense that it tries anything new nor that the song structures are progressive. Even on the two 8 minute monster tracks, the music never gets too progressive, which actually helps the band rather than hinders it in my book. With how fast and complex it is, it's to the album's best interests that they kind of "dumb down" song structures to allow the listener to take in the tracks a bit easier.

The next point I realized when listening to this album is simple - exactly how metal is this, really? There's some good riffs, such as the crushing one that opens up my favorite track "A Suit of My Flesh," but other than that… there's not many true, actual death metal riffs on here, and it is slightly disappointing. After all, the music is supposed to be death metal, but I'd argue this is more of just progressive metal that happens to have screaming instead of singing. There's a whole lot more noodling than riffing on this thing. But don't get me wrong; the noodling leads are impressive and a lot of them are memorable. There's a decent chunk of good melodies on here performed by every instrument and it does (mostly) make up for the lack of riffs.

I rarely dedicate a whole paragraph to talk about this, but I guess I have to because there's an abundance of them. There are 6, count them, 6 instrumental tracks on this album. I don't really like instrumental music nearly as much as music with vocals. A lot of these bands seem to love putting a bunch of instrumental interludes on their albums, and they almost always fail. Equipoise takes that to another level; six of the fourteen tracks are instrumentals with five of them being interludes, and all six of them fail to do anything special. I can't remember any of them, none of them are interesting, and I'll probably end up deleting the tracks off my phone altogether because I always skip them anyway. Regardless, I don't let instrumental interludes affect my scoring, unless they benefit the album. So, I'm just going to ignore it and pretend they're not even there and just work with the 8 tracks that do have vocals.

Unfortunately, this album's biggest setback, something I still have not gotten over in all the times I've listened to it, is the abysmal mixing presented on this album. I can't recall hearing a modern tech death band, whether on a big label like TAE or independent, with such a horrible mix job. I love bass. I play bass, in fact. Bass playing like the one presented on this album inspires me to play bass. That all being said, the bass is way too fucking loud on this record. It drowns EVERYTHING out, and it takes the forefront of every single song, at almost every single moment. Hugo is a fantastic bass player and I love his work. But dear God, it does become pretty irritating when all you hear is brRRRWEEEOOOObrrrrbrrdodoDodooDODODODdoolleewreeoooo over every. Other. Fucking. Instrument. There's a keyboard player on this album. You probably couldn't tell because he's barely heard throughout the album. There's also two guitar players (obviously), but you wouldn't know if you just heard the album because the bass is drowning it out. The drums sound like they're a mile away, and the vocals, while they're not even good to begin with, also sound like they're a mile away. The bass, though? Hugo might as well be playing right in front of you with his amp cranked up to max, because it is, again, by and large the loudest thing in the mix.

Okay, maybe I was a bit harsh on the mix. It's not the worst sounding album on the planet, not by a long shot, but this album could definitely use a remix and remaster. Seriously. It's a good album, a really good album with a lot of good songs. However, I do have to shave off a point of my rating because of the mixing, which will hopefully change in the future with a better release of the album. Gripes aside, I do think fans of technical death metal, or just fancy schmancy instrumental virtuosity will have something they enjoy about this album. Despite its setbacks, it's got a lot of songs worth revisiting on it and it is a pleasant listen when you can move past its flaws. This is just a debut! I do expect, moving forward, a lot of big things from this band and I hope they can continue to move in an upward trajectory, because the ideas are there to create the next big thing in the genre. For now, it's a solid debut that fans of the genre should give a try.

Favorite song: A Suit of My Flesh

Yes, 90% of the reason I’m writing this review is so I could use that title. There’s some accuracy behind that unbelievably hilarious pun, though – despite the star-studded lineup with more collective skill than usual (even for a supergroup), this isn’t very proggy. Unlike a Spawn of Possession or Deeds of Flesh type tech band, which mixes the diddly sweeps with unorthodox writing, weird time signatures and stop-start pacing, Demiurgus is almost entirely in 4/4 (from what I can tell) and the songs are pretty easy to follow from a structural perspective. They basically take a Black Dahlia Murder-styled modern melodeath release and try and pack as many notes and solos into it as physically possible, while still keeping the skeleton intact.

Because of this, at first listen Demiurgus bursts through at the seams with insanity, but by the third playthrough there aren’t any surprises. There’s enough window dressing to clothe the entire Empire State building and that’ll keep you occupied for a bit, but you see through the façade quickly. To use a weirdly elaborate metaphor, Demiurgus is like a little brother that really wants to play goalie in hockey like his older brother does. He goes out and buys high-end goalie skates, gets decked out in brand-new Vaughn equipment, looks real cool like his big brother playing Junior B…but once he steps on the ice it’s clear he has no clue what he’s actually supposed to be doing. His movements don’t look or feel natural, like a goalie’s usually do. In much the same way, Demiurgus has all of the flashy and immediately noticeable stuff that tech-death usually has: longwinded (REALLY longwinded) solos, random bass licks, gravity blasting as a rhythmic baseline, but if you remove that “gotta stay tech” mentality from this, it’s a straightforward melodeath album at its core and little more. I would be much more comfortable recommending this to a fan of Light This City and Darkest Hour than I would a fan of Suffocation, lemme put it that way. Much of that has to do with the diminished arpeggios (I think that’s what they’re called?) that the riffs rely on a lot, and mix that with the relatively non-gritty guitar and bass tones and you get an album that’s really, really melodic, even when you compare it to something like Inferi.

Part of the “little brother goalie” comparison also comes from the fact that Demiurgus struggles to find an identity of its own amidst all the “that’s this guy from this band” features. Out of all the musicians present on this album (and excluding the twenty guys who provided one guest solo each), the two that contribute most to the vibe of Equipoise are Phil Tougas and Hugo Doyon-Karout, or at least they stand out the most to me. Phil’s fast, “hey this was probably inspired by some classical piece or some shit” style that you can hear most in First Fragment is on full display, often making up the meat of the intro and main verse riffs. Hugo’s bass playing arguably stands out more here than it ever did in Beyond Creation (keep in mind he didn’t play on The Aura), and it’s very distinguishable throughout most of the album’s runtime. If you’re not a fan of the bwwwwoowwwws on bass, close this review and don’t look back cause you’re not gonna like this. I do appreciate it when the bass can hold its own on an album myself, though. I’m the least familiar with Virulent Depravity out of all the parent bands in this supergroup, but cursory listening reveals it to be pretty standard for the Artisan Era crew, and sure enough, that sort of vaguely atmospheric but not really grounded melody patches the guest features together through flamenco guitar parts and a bit of straightforward riffing (by comparison). There’s lots of subtle nods to the musicians’ main projects, intentional or not, and Chason Westmoreland is arguably the most fitting representative, being perhaps the most talented journeyman drummer in metal. This guy is ridiculously fucking fast and has some jaw-dropping stamina, but it doesn’t seem like his style is distinct enough for it to stick in any one group for super long. As such, he was pretty much the perfect guy to be the metronome for Demiurgus, because that’s a microcosm of what the album is: 10/10 for the skill, speed and flashiness, and a 1/10 for the lack of clear identity and (in)distinct personality. It doesn’t help that the songs are pretty samey and there’s not much as far as curveballs on this album. Sure, there’s the flamenco guitar stuff to give some desperately needed breathing room to the songs, but I feel like a couple of seven-minute epics could have gone a long way in giving this the separation it needs from other tech-death.

As a bit of a tech-death apologist myself, I can enjoy this just fine. It’s all style and no substance, absolutely, but there’s so much style that you can make it through the album at least a few times without getting bored. Those who despise mindless tech for tech’s sake will fucking HATE this album, but at the same time I can see this being a decent gateway into the genre for newbies just because the song structures are so accessible. All the pieces are there, Equipoise just has to write some more interesting and unusual songs if they want to dethrone Archspire, who are currently the unanimous holders of the Tech Death Crown due to the breathtaking nature of Relentless Mutation.