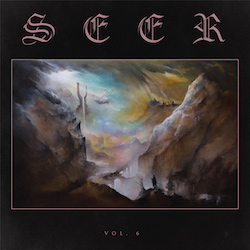 Sometimes it’s easy to tell whether or not a band loves what they do and this is one of those instances. Seer’s 2nd full-length record is a classic, from the artwork to the music to the vocals, all that can be said is, “ooh,... ahh!”. Landscaping guitars inject rhythms of tenderness and solace whilst contrasting the harshly exerted vocals. The drumming tramps along whilst trying to referee this battle amongst magical guitar passages, solos and leads as the keyboards sit in the background playing along to this quarrelsome clashing of musical prowess. This is one dreamy doom metal record with resounding replay-value and immersion. And for those of you that love Enslaved (current) and Gojira’s music, there are a few surprises on Vol. 6 for you.

The enchanting and cinematic opening of Vol. 6 titled “Oath of Exile” bleeds into the 2nd track “Iron Worth Striking”, and let me say it here; this is definitely worth more than one listen. There is so much offered on this song alone that you may end up repeating it several times before advancing to the following, which are just as enticing. How was this work of insurmountable sagacity accomplished?, I asked myself during the time spent listening. Given the fact Seer is branded as being doom/sludge metal, I already had a preconceived notion of what to expect sound-wise, I certainly was not prepared to be astonished in such a way. What Seer did is unconventional to an extent; they layered the basics of doom metal and sludge metal as the supporting ground work, then built upon it with by utilizing a series of intertwined playing styles borrowed from multiple genres. Over time the music begins to take the form of stoner doom, traditional doom, post-black metal and progressive metal, all the while channeling a steady and balanced rhythmic consistency. Though multiple disciplines are poked at, Seer remembers to keep the music within the parameters of their respective genre; as it’s easy to get lost when trying to fuse so many identities together.

The vocals strive to be its own star on Vol. 6; they vary among mid-ranged growls, harsh screams, speed-metal-esque exclamations and some phenomenal clean singing. They are truly something special on this record, in-fact, you look forward to hearing them, given how much of a delight they are to the ears. “Frost Tulpa” is a special one because it offers the most progressive instrumentation on Vol. 6; it’s a fine piece of music that elevates the vocal aspect of Seer’s music to a new height. More passion is exerted through the clean singing, rough snarls and growls, giving a feeling that truly captures the gorgeous cover artwork of the record. And with the zenith of Vol. 6’s “As the Light Fades” slowly approaching, you begin to understand the purpose behind each track; it was all a build-up to that moment of everlasting flummox. This is the track that binds the album, it pushes the boundary of the listener’s thought musically and lyrically whilst birthing a sense of seclusion and divinity. This is a fine example of music that strikes at the core of rhythmic intoxication.

The lyrics, so intelligently written throughout the record achieves its peak of sophistication, prudence and wisdom on “As the Light Fades”. That middle section just beginning at the 4 minute mark… so, so good.

If you’re someone that appreciates this beautiful, life-sustaining world that this plague know as humans have been so fortunate yet unquestionably un-deserving to inherit, then this is an album that belongs in your collection. I’m shocked that Seer are not a more well-known unit as they deserve to be; however, with Vol. 6 being such an enveloping experience, that will change. As Spring approaches and the temperature begins to warm, this is the perfect music to usher its arrival.