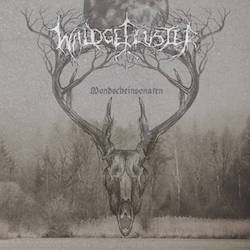 Waldgeflüster is a German band coming from Munich. The German black metal scene is widely known and respected by the fans. There are tons of bands which play a quite orthodox form of black metal, while many others are more interested in playing a sort of black metal heavily influenced by the ancient history of their land, which is commonly known as the pagan black metal subgenre. The German scene of this subgenre is, in my humble opinion, one of the best and the range of bands playing this style is quite rich and interesting. While some bands have a heavy folk influence, using folk instruments more generously, other ones use them sparsely, being a secondary resource used to enrich the music in certain moments. I would place Waldgeflüster in this second group. Musically speaking, Waldgeflüster plays black metal with a certain somber touch, creating a melancholic atmosphere, without lacking the expected aggression in a band whose roots are the black metal genre.

Mondscheinsonaten is the fifth album of a band whose line-up has remained quite stable since it became a full band in 2014. Prior to this moment, it was a one-man band created by Winterherz. His talent was already clear in the first and impressive three records entitled Herbstklagen, Femundsmarka - Eine Reise in Drei Kapiteln and Meine Fesseln. Going back to the latest record, I can safely say that Winterherz's touch and talent are still in a very good shape. Mondscheinsonaten is a very nice piece of pagan influenced black metal with the aforementioned dark and somber touch, but with a good range of elements which make the album an excellent work. The album contains seven songs, being some of the quite long as the impressive 'Gripfelstürme', probably one of the best if not the best track of this album. It's a very varied and dynamic track with tastefully composed sections and melodies. This lengthy track includes excellent melodies, some powerful and pagan-esque clean vocals which accompany the usual high-pitched shrieks, as well as intelligently placed atmospheric keys. 'Rotgoldene Novemberwälder' is the single of the album and summarizes perfectly the main characteristics of this album. It is an excellently structured song with impressive guitars and background vocals, which make the sound epic yet mournful. Once again the clean vocals, both in the front and in the background, play a major role in making these songs emotional. Even though the top-notch guitars and the already mentioned touching clean vocals are the ones which have the most import roles in Mondscheinsonaten, Waldgeflüster successfully use other resources to enrich this work, as some very nicely composed atmospheric keys which are one of the highlights in the very intense and hypnotic track entitled 'Und der Wind'. Acoustic guitars are also used in different tracks, mainly as a song opener, which is sometimes abruptly interrupted by a purely black metal-ish section or as an introduction to an acoustic esque sung section as it happens in the album closer 'Staub in der Lunge'. This song perfectly closes this excellent work leaving us a permanent feeling of melancholy.

Mondscheinsonaten is undoubtedly an impressive work which confirms Waldgeflüster as one of the best bands in the German pagan black metal scene. With songs having a strong black metal base, the German guys build an album rich in the use of different elements, which makes the listener keep interested from the very beginning to the end. It’s an emotionally very intense album, which I think is something great and makes the music even more special.