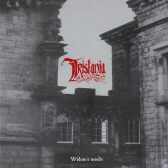 Tristania performs gothic metal to the fullest extent. They are interesting in that apply multiple vocalists in both male and female types for their wares. The music here moves at a medium momentum and attempts to drip atmosphere into the tracks with the use of keyboards and more atmospheric elements. The effect is a pleasant one as the songs here certainly have an upbeat feeling that is very nice to listen to.

However, they are not as depressing as the likes of My Dying Bride and certainly sway towards a more positive spectrum of things. The emotion and passion of the band are felt, but there is even more emotion on display from some of the other acts in this genre such as Moonspell. A comparison to that band finds them being more varied, but less impactful overall. The compositions on this album are long and intricate enough. However, the music comes across as slightly simplistic sounding and this is a flaw with the work. The music is still very dense and exciting. The guitars form a nice swirling backdrop of emotional impact and they provide a nice blueprint for the material. The use of other strings and keyboards is nice and adds a layer of atmosphere to the mix.

This album provides a solid viewpoint for the gothic metal genre, though it isn’t perfect by any means. It still showcases the manners of adding sorrow and emotional outpourings to the music in fine fashion. One wishes the album would make the impact of My Dying Bride’s best material for example, but this is a notch below that output. Widow’s Weeds is still a very solid gothic metal album and worth a listen from anyone calling themselves a fan of the genre. May the atmosphere reign the day with Tristania.