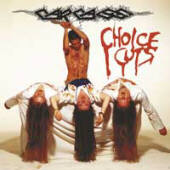 Usually when I listen to a "best of" album, I conclude that it's best left for the fanatics or those looking to introduce themselves to a band. I suppose the same could be said for Carcass' Choice Cuts, but I can't help but feel like there's something more to this piece of history. Carcass isn't just any band - they revolutionized grind and death metal. Their importance in metal is without question, as is the quality of their work.

Choice Cuts breaks down the Carcass back catalogue chronologically, starting with Reek Of Putrefaction (1988) and going through Swansong (1996). Simple and understandable, as well as a clear way of showing the progression that Carcass made during their career. Carcass' two early albums are well represented with what is some of the best material off of the albums, such as 'Genital Grinder' and 'Exhume To Consume.' This is the case for the rest of Carcass' catalogue. Necroticsm (1991) and Heartwork (1993) – Carcass' most revered works – are both aptly emblazoned by top-notch songs such as the dark and gruesome 'Incarnated Solvent Abuse' and the slick, no-bullshit 'Buried Dreams.' Despite the fact that many loyal, longtime Carcass fans were put off by the bands last piece of work, Swansong, it is still well represented and an important part of the band's legacy.

Of course, it wouldn't be very wise to just release a "best of" album without throwing in something special, would it? To amend such a problem, Earache threw in two quality Peel Sessions, one recorded in January of 1989, and the other in December of 1990. Live recordings tend to lack that something, however, Carcass' Peel Sessions yielded something special. The decent-quality live recordings manage to capture Carcass at their unpolished, vicious, death/grind metal best.

Choice Cuts is a fine release that well documents the contributions that Carcass made to the world of metal. Old fan, new fan, or not a fan at all, it really doesn't matter. Choice Cuts is an album that you can't really go wrong with if you're a fan of grind/death.