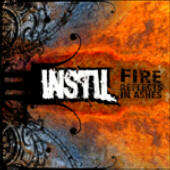 Swedish death metal is propagating southward, and the Dutch are perfecting its method. Fire Reflects in Ashes is precisely the type of Swedish death metal that most musicians have all but abandoned: No keyboards, no non-traditional instruments, five guys with guitars, bass and talented drums. Include some interesting hook lines, catchy rhythms, and all the trappings of vintage Swedish heavy metal, and that’s a quick description of Instil.

Here’s another way of looking at them: Picture a mixture of The Haunted, Arch Enemy, The Crown, and Edge of Sanity. Add a hardcore influence to the vocals. Master it at Antfarm Studios -- Denmark’s other contribution to civilization, right after Elephant beer -- so it sounds just like The Haunted. You’re done. That was easy, wasn’t it?

Instil are clearly talented, but they don’t distance themselves very much from their influences; rather than covering new or experimental ground, they’re improving on well-honed musical ideas. Granted, this is a common technique for young bands. It enables a band like Instil to write interesting music with very little experience. Unfortunately, though, the end result is predictable: excellent songs that are only transiently entertaining, because their material is never groundbreaking enough to be lastingly memorable.

I’m not suggesting this is a bad album. I’m not even calling it unoriginal. It just isn’t especially groundbreaking. In fact, Fire Reflects in Ashes has a few excellent songs -- the title track, “Chimera”, and “Transient” stand out as shining examples. It even shows off real, promising talent. However, this band does almost nothing their musical influences don’t -- unless you count a hilarious Tom Petty cover. It’s great Swedish death metal, in the vein of The Haunted and The Crown, but it could benefit from some diversification.