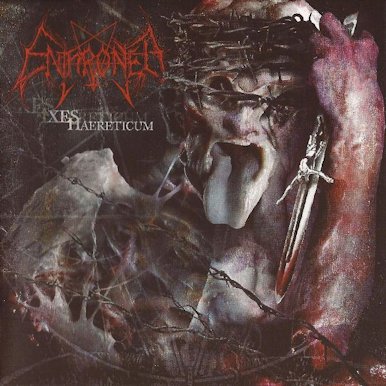 It’s rare that fast black metal keeps my attention without doing anything extraordinarily adventuresome. For some reason, though, Enthroned always interested me. Xes Haereticum is consistent with everything they’ve released since Prophecies of Pagan Fire: Fast, well-structured, orthodox black metal, in the same category as Marduk, Absu, and perhaps Immortal. The bad news is that Enthroned have made almost no musical progress. The good news is that they’ve honed their already formidable skills to create a solidly entertaining album with no disappointments.

In fact, Xes Haereticum has much to offer. Listen carefully and you’ll hear a thrash metal undercurrent reminiscent of the old Kreator albums. You’ll probably notice a 1980s influence in their guitar solos, similarly — no surprise, from a band whose members list Motorhead and Destruction among their personal favorites.

Here’s a quick catalogue of album features that other genre-specific examples miss: Good production, no keyboards, no tone-deaf “Viking” singing. That’s three gold stars for Enthroned. This disc’s production is excellent, with every instrument discernible, though the drums occasionally sound distorted. Considering that Sabathan’s guitar wizardry could give the late 80s shredders a run for their money, that much is absolutely necessary. Furthermore, singing is sporadic and always on key. Best of all, their experimentation never detracts from the memorability of individual songs. In short, there is nothing wrong with this disc.

So, why isn’t it achieving perfect ratings? Why not give this album solid 10’s, then?

That’s simple: One hallmark of a band’s greatness is their distinguishability, and Enthroned still aren’t there. Despite being brilliant musicians, and despite making consistently excellent albums, these Belgians do almost nothing to distance themselves from an anonymous legion of genre soundalikes. Almost like black metal’s answer to Iron Maiden, any song from any album fits on any other album. That detracts not just from their originality, but from perceptions of their musicianship, atmosphere, and overall listenability.

Therefore, to whatever degree one could call black metal orthodox, Enthroned are masters of writing orthodox black metal. Drawing from a wide variety of influences, they’ve produced an entertaining, powerful, excellent album. It has everything black metal needs, and there’s nothing misplaced or superfluous. All one could ask is that they’d do something that would distinguish them from the metal hordes of Scandinavia.