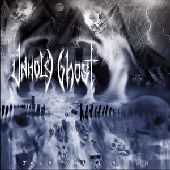 You have to love it when an album starts off like some rabid, genetically-enhanced bastard of the Cerberus trying to munch on your skull. Much like the watchdog of Hades keeps lost souls at bay, the frantic-blurrrr-opening-track (FBOT™) keeps the listener subdued and puts an end to all hope of escape. Hats off to Unholy Ghost, whose interpretation of the FBOT is