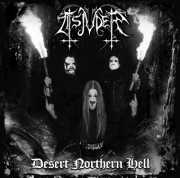 Honestly speaking, I like convinced people more than those with lukewarm positions. Of course, sometimes conviction turns into blindness. I could give you the names of some German politicians and probably you would understand what I mean. But I hope that nobody knows these assholes outside Germany. Moreover, I prefer to speak about a very convinced band; naturally Tsjuder. Desert Northern Hell embodies their musical convictions very well and their total dedication to the genre Norway stands for. So, let's raise the blood-soaked flag of black metal while the music eats your soul and destroys any form of Christian value.

If you want to explain your girlfriend, your neighbor or your milkman the fascination of the Norwegian movement, you can make good use of this album. I don't say this is the best work in the history of black metal's once leading country. The classic albums of Mayhem, Immortal or Emperor still stand strong. Yet it is definitely true that Tsjuder's hailstorm unleashes the gigantic power of total destructiveness. Its single components are not innovative or second to none, but the result is simply mind-blowing. Firstly, the technical implementation must be described as perfect. I do not listen to a rumbling underground production, but the album does not sound polished, too. The album's title does not promise too much, hell is here. This dense, intense and terrifying sound builds the fundament for nine excellent tracks, even though I have no clue why Tsjuder join the countless formations that offer a (classic) Bathory song. "Sacrifice" is not bad, but it has just become a habit, or, to be more direct, a stale idea to play a song of early Quorthon (R.I.P.). However, the own compositions make up for this blemish. Just check out the eight minutes of "Mouth of Madness" with its flattening guitars, the morbid, Hellhammer-influenced aura and the well-integrated breaks that increase the dynamic without hurting the song's coherence. Hatred creeps slowly out of its hole during this mainly mid-paced piece and every single note fits. Typical Norwegian black metal? Yes, but much better than many songs of Tsjuder's competitors.

The three-piece cannot hide its affinity for excessive song-length. "Morbid Lust", the closer, clocks in at eleven and a half minutes and do not even think about the option that it brings the apocalyptic inferno to a peaceful end. The restless double bass motivates the dudes to an excellent performance and grim bitterness shapes the song. Tsjuder do not concentrate on the icy leads that characterize the early works of some of their famous compatriots, but they share this passion for fateful melodies which are interspersed whenever it is necessary. To be honest, it happens rarely, but who wants to listen to a colorful bouquet of melodic sequences when it comes to black metal from the top of Europe? "Ghoul" also crosses the six-minutes-border and pummels the listener with a hectic configuration. Tsjuder make the impossible possible, their fanatic combination of murderous high velocity drums and well-hidden melodies, created by rabid and insane riffs, works very well. In my humble opinion, the dudes from Oslo reach their musical summit with "Ghoul" and maybe it is a tiny problem of the other songs - with the exception of "Mouth of Madness" - that they do not develop a higher degree of individuality. However, this is no big deal, because each and every track deserves an 80 plus X percent evaluation.

Sometimes Desert Northern Hell sounds to me like the mature continuation of "Pure Holocaust" and fans of Setherial or Urgehal will enjoy this full-length as well. It's a masterpiece in terms of Scandinavian black metal, no more, no less and even Euronymous (R.I.P.) would applaud, if this sick brain called Greifi would not have criminally intervened. By the way, his murderous deed had nothing in common with conviction - this was just unbelievable bullshit, to say the least. Thank Satan, the spirit of dudes like Euronymous lives on through albums like Tsjuder's third work.

As with all musical genres, Metal or otherwise, a certain infusion of novelty is needed in order to keep it vitalized, otherwise you wind up with stagnant and tired bands that keep going long after a time when they should’ve just put the whole damn thing to bed. On the other side of the coin, however, you have bands that understand the purer foundations of Metal, in this case Black Metal, and are able to build upon that in such a way that the music maintains a primal energy that needs no expansion into diverse territory in order to keep itself going. Norway’s Tsjuder prove themselves to be in the latter category with their third release Desert Northern Hell. It’s old school Norwegian Black Metal, pure and simple. It’s like being beat up by that bully who’s been taking your milk money for the past few months; it’s not particularly new, but you don’t notice it due to the ass-kicking you’re getting.

I was particularly impressed with Anti-Christian’s drumming. Having to take time off from the band due to problems with tendonitis (the affiliction, it’s not another band) and then coming back to replace his replacement, you get no indication that there ever was a problem. Particularly on the track “Ghoul”, his timing is perfect and provides a strong, talented backbone throughout all nine tracks of the album. The guitars don’t really detract much from straight-ahead early 90’s blackness except on the mellow intro to “Unholy Paragon”, which isn’t so much an exercise in diversity of style as a means of throwing you off-guard before the song goes full blast. Desert Northern Hell showcases the overall talent of each member of the trio along with their capability to play as a solid Black Metal unit incredibly well with no one member really outshining the others, permitting the listener to enjoy the album as a seamless whole.

There are bands out there that the Troo, Ghrymm and Kvlt side of me actually prefers to have low production levels on, Tsjuder isn’t one of them. They balance just the right level of technical skill with all out brutality that would come out lop-sided if they didn’t have the production clarity on that they did. Nag’s vocal style is not heavily inundated with effects, which allows the natural evil of it to come out even more. The mid-level production suits them well and I wouldn’t be opposed to hearing it used more on further albums.

Tsjuder is a band that hasn’t been particularly prolific during their 12 year career (1 EP and now 3 albums), however Desert Northern Hell shows the time is being used wisely. Definitely a band I look forward to seeing live.