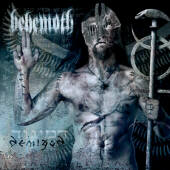 Simply put, Demigod is one of the best Death Metal albums put out this year. Song for song, Nergal and Co. unleash a darker, more stark assault on the listener than was experienced before, even with the mighty Zos Ka Cultus. In Demigod, Nergal's wide interest in mythology touches down up on Egyptian myth with songs such as the opener “Sculpting the Throne ov Seth” and “The Reign ov Shemshu-hor.” While it would be easy to make a quick assumption they’re aspiring to be the new Nile and despite the fact that Nile’s own Karl Sanders plays on “Xul,” the album maintains Behemoth’s signature sound, combining militant roars with surgically precise riffs and blast beats they’ve become known for. An interesting addition to Behemoth’s musical repertoire is the utlilization of acoustic classical-style guitar throughout the album; it hasn’t really been used since the Grom album and provides an atmospheric counterpoint to the utter brutality of the album. Nergal’s vocals are much more enraged, much thicker than in previous recordings and while it may detract somewhat from trying to make out some of the most beautiful and savage lyrics written it does not detract from the delivery. The production on the album is noteworthy as well, a clear, atmospheric treatment of practically every note of every song by the hand of Daniel Bergstrand, who has worked with bands such as In Flames, Strapping Young Lad and Soilwork to name only a few. From every aspect of the album, Demigod is incredible.

In terms of standout songs on the album, there aren’t any; all ten tracks of the album are sheer epic Death Metal at its finest and to pick one that rises above the others would require wallowing in technical trivialities that would take too much away from the complete enjoyment of the album. Any fans of Behemoth, those who love solid brutal Death Metal in general and those who have a loose tooth that needs to come out will not be disappointed in this album. Demigod is an exemplary piece of work.