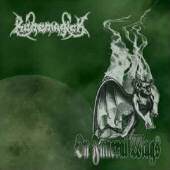 The one-record-a-year band, Runemagick, return again in 2004 with another funeral doom record that may be their most accomplished record to date.

A brief listen of On Funeral Wings might only sound marginally better than its predecessors. One can immediately notice a newfound sense of depth in each track, effectively pulling in the listener more than past records. However, it's on the fifth, sixth and seventh listens that On Funeral Wings really comes of age, and demonstrates that their hard work (releasing something every year since 1997) has paid off.

Runemagick operate at three speeds: slow, very slow, and torturously slow. If you're looking for a quick fix, (of well... anything) then Runemagick might be the worst band for you to stumble upon. But if you're looking for something that will have you still interested after the 50th listen, then Runemagick is your band. On Funeral Wings succeeds because of its ability to suck listeners in with tracks that build up with each minute of their often lengthy duration.

Runemagick are still as consistent as ever in regards to their interpretation of funeral doom, but as with most consistent bands evolution will always be a problem. They're still the same act as they were many years ago. This can be problematic for those who enjoy seeing their favorite acts to constantly push the envelope. However, for some bands like Runemagick, that's not a pursuit they find to be worthwhile. If it's not broke, why fix it?