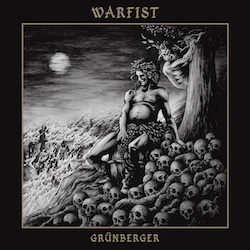 Warfist hail from Poland. They belong to these formations that combine skillfully the extreme trinity, thrash, black and death metal - and they do it exactly in this order. Grünberger shreds, pummels and rapes without sharp-edged thrash riffs, an overdose of Satanism or absurdly low tuned guitars. Nonetheless, its violence has an impact and it feels good that bands of this format seem to have enough commercial potential to let them record three albums - or even more. Don't get me wrong, the ten tracks do not sound commercial in any way, I am just happy that such combos find labels which release their stuff. Perhaps the close relationship of the beginning of "The Punishment" with that of "Hell Awaits" was a good reason for Godz ov War Productions to sign them. Unfortunately, nobody tells me if my suggestion is right, but one thing is certain: this piece belongs to the highlights of the album.

By the way, it’s an almost monolithic full-length. All tracks are cut from the same cloth. Warfist attack with unbreakable belligerence during the entire work and this approach has both bad and good aspects. I like this kind of full service, but the here presented material is not immune against a certain uniformity. It would not be fair to blame Grünberger for monotony and I also would not call it predictable. However, I must admit that the sonic inferno lacks the finishing touch every now and then. "Death by the Cleansing Fire", for example, offers stormy blast beats, violent patterns and a spoken part in German. A good song, no doubt at all. However, it does not force me to press the repeat button. The following quasi-title track creates the next Apocalypse and sounds like early Sodom. Either way, the result remains the same: a good song, no more, no less. The first track that gives the listener room to take a deep breath appears on the ninth position and these similar song patterns are pretty problematic over the entire playtime.

But grumpy old men like me are never satisfied, so do not take my complaints too seriously. Warfist have the right attitude, they avoid fillers and are able to offer their music with an adequately rumbling and infernal sound that transforms their natural aggressiveness. It's a borderline case, too good to be ignored and a little bit too limited to recommend it without restrictions. Therefore, every extreme metal maniac, especially fans of old Kreator and, as mentioned before, early Sodom, should check out some songs in order to build her or his own opinion. But those of you who need some stimulants each morning can buy it blindly.

Poland’s blackened thrashing force return with a fierce and forthright record that touches critical periods in time that carried the weight of The Inquisition and The Black Death Plague. Warfist summons Grünberger, the 3rd full-length record to dawn upon the masses eager to roll-around in old tales of atrocity. Don’t look for innovation cause there’s none here to be found; expect fairly candid black/thrash metal from this newest effort.

The march starts-off on the left foot with “Black Army”, a track that points the listener in the direction Grünberger will be traversing. Utilizing the acoustic guitar to set a melancholic tone that prepares you for the typical blasting we all know thrash metal for having and is lauded by guitar soloing and strong leads that are the backbone and the primary selling point of the better songs on Grünberger. The drumming here goes through some amount of tempo changes and levels of versatility when an interval from the speedy stick bashing is needed. This blueprint could have been exploited for the songs to follow. Though the groovy delicacy of “Feasting on Dead Bodies” plays with somber-esque vestiges, they become overwhelmed by monotone thrashing, thus one is left searching for such moments on the record that are very scantily placed. Half-way through the playtime of Grünberger, you’ve heard most of Warfist’s MO, not implying boredom sets in, but you get a full peripheral view of what is to come from the remaining proceedings. Considering the heaviness of the themes, more advantage could have been taken to render a better musical representation. If the musicianship heard on “Feasting on Dead Bodies” and “March of Death” (another exceptional track) had been used as guidelines on other songs, Grünberger would have been a better instrumentally and lyrically aligned record, in turn boosting its replay-value.

Grünberger has a clean production that could have been capitalized on for a greater memorable experience. Besides the already mentioned tracks nothing else stands out as possessing much instrumental depth. Already pushing the length in being a 37-minute journey, any longer and Grünberger would have suffered extensively from boredom. However, there’s just enough to get you to the finish line without feeling irreversibly exhausted. Thus said, the second half of Grünberger has better organized compositions than that of the first half. Tracks here bare a conscious tone, in so preventing the theme and music from feeling disconnected. “Death by the Cleansing Fire” and “Atrocious Savior” make better use of the speed metal and black metal virtues to stir-up an atmosphere of panic and tyranny, as one would imagine existed during the era of The Inquisition.

The vocals on the previously mentioned tracks and throughout Grünberger are as ravishing as one would expect to hear from a black/thrash metal band. Being exclaimed in an angry tone, the listener is immediately made aware of the merciless nature of the events that were perpetrated. That raw edge the vocals contain adds a passionate touch to the record, one that matches the combined expression of the drumming and guitar work.

All-together as a full-length record, Warfist does just enough on Grünberger to provide the listener with something that is worthwhile a 2nd or 3rd spin. Grünberger is not a bad record, it just does little in crossing the standard bar for black/thrash metal.