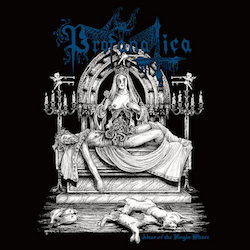 Profanatica's Altar of the Virgin Whore sees the band emerge with a fresh sound possessing a more detailed mixing and mastering effort compared to that of their past releases that were particularly turbid to some degree. There is a considerably more distinguishing identity to Profanatica’s music now resulting from this refined audible tuning. More detail is presented therefore giving the songs a glossy appeal. Though having heard their 2016 full-length effort The Curling Flame of Blasphemy, the need to delve deeper into their material was never there and never did present itself after multiple listens. The problem with the record is it tried to incorporate too many styles at once resulting in a more experimental release that ruined the whole black/death metal vibe at least for me. However, with this 19 minute Ep, Altar of the Virgin Whore, Profanatica returns to their traditional method of playing, in addition the sound has been ramped-up to accommodate the doomy style often present in their compositions. This new production possesses the potency required to keep the drive of the music engaging; with lots of HM-2 pedal distortion taking place, it will surely appeal to many that enjoy the early to mid-90s death metal sound.

Altar of the Virgin Whore is more reminiscent of their 1991 demo Weeping in Heaven; It has that barbaric style of drumming often times heard as a trademark of the genre, guitar work that flows like an under-current providing a warped layer to accompany the gannet-esque vocals and beefy drum sound. Some of the band’s back catalog is highly regarded within the community as influential and indeed pioneering at times, so for them to release a record within that vein should come as a pleasing surprise to many. Tracks like “Conceived With Sin” and “Prayer in Eclipse” are composed such that they do justice to the cover artwork in conjuring an air of animated desecration. They establish early on how far the band has come since producing music and scriptures of this sort. There are still segments of black/doom metal to be heard throughout the record that adds a bit more depth to the Ep. Also to be found on Altar of the Virgin Whore are guitar riffs that date back to an early period within the death metal scene giving the Ep a strong dose of nostalgia. Though the leads are repetitive at times, they invoke a condensed atmosphere that hovers above each song like a shadow. Another notable quality displayed on Altar of the Virgin Whore is the confident stride it has moving from one entry to another. The fabric therefore provokes a direct and bonding message that thoroughly oversees the produce. With short and effective interludes being strategically placed, the bond each track shares can be heard. As a collective, the band played very surgically; meticulous thought seemed to have played a leading role in the formation of the record as opposed to their 2016 album.

I honestly think this is the sound Profanatica should keep for future releases, and as a band signed to Hells Headbangers for 12 years, earns them the right to obtain the most suitable production of their effort. Altar of the Virgin Whore is an Ep that should please supporters of old. It has the ancient craftsmanship signatures of Profanatica matched with a most detailed yet organic mix and master.

Saint by day, slut by night: