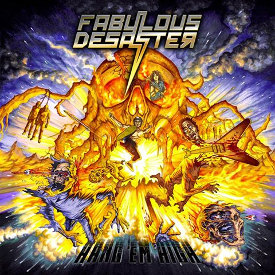 Another ambitious formation from the German underground challenges the worldwide metal community. Its name indicates its main influence in a matter of seconds (although they use, unlike Exodus, the German version of "disaster") and the rasping guitars of the opener leave no doubt that pure thrash without modern ingredients is on the agenda. The second song with the promising title "Faster than Light" also swings the old school axe and therefore we do not need to discuss about the target group of this publication. Fans of the early albums of Exodus, Forbidden or Atrophy, it's your turn, while followers of Machine Head and similar hypocrites can go to bed. Sleep well, my friends with a bad taste, you will miss nothing.

First things first, Fabulous Desaster impress with a very solid energy level. The debut sounds angry, fresh and restless, inter alia because of the production. It puts the emphasis on the continuously slicing guitars without losing the big picture. Any kind of technical awkwardness is unknown to the debutants and this is not a matter of course, even when considering the modern recording options. The sound also features the lead vocals in an adequate manner. Neither too loud nor suppressed, the talkative guy behind the mic delivers his fairly high-pitched vocals. During the entire full-length, he seems to be constantly at risk to go mad and his sometimes-screeching voice has enough power and expressiveness to convey this slightly insane feeling in a convincing manner. Only the unbeatable performance of godfather Paul Baloff (R.I.P.) remains untouched, although the band mentions his name in one of the songs.

It goes without saying that these defenders of the thrashing faith like high velocity. The integration of some mid-paced parts increases the dynamic, but trudging rhythms do not play a role. Just like the pinpoint drums, the abrasive guitars also intensify the fury of the compositions. "Midnight Fistfight" shows the entire potential of the newcomers. Fiery, compelling riffs form the irate verses, the pithy chorus stands out and even the less angry solo part appeals to me. Perhaps some detractors might say that the album offers a very generic kind of thrash, but these ugly boneheads have bad breath and weeping eczemas at the back of the neck. Fabulous Desaster just play thrash the way it was meant to be and there is nothing condemnable about this approach. Song titles such as "Thrash Bang Wallop" or "Thrash Metal Symphony" do not entice the listener with sensitive lyrics, but they ask for an appropriate implementation. And yes, the debutants are aware of this fact. In particular the "Symphony" - don't be fooled by its name, there is absolutely no orchestral bullshit - unleashes a remarkable storm and it does not matter that its verses are similar to those of Exodus' "Raze".

Finally, the four guys originate from Bonn. Back in the days of the Cold War, this was the seat of government of the state where I grew up, West Germany. Well, Fabulous Desaster are not the new rulers of the German thrash scene, but Hang 'Em High whets the appetite for another portion of their kind of thrash. Furthermore, the University of Bonn has a nice park which offers a beautiful view over the majestic Rhine - and the prospects for the future of this band are beautiful as well.