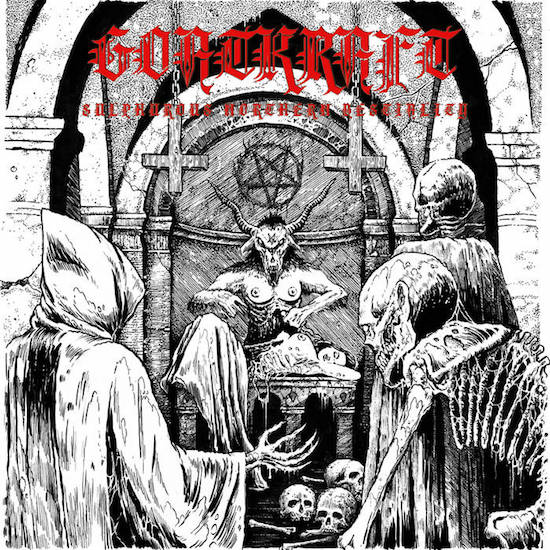 Having heard Goatkraft’s Angel Slaughter EP from 2018 and knowing it possessed the affluence to spawn a full-length record, I was highly on the lookout for their next release eager to see how the band would conduct themselves on a larger scale. Now amidst the presence of Sulphurous Northern Bestiality Goatkraft has followed up the previous effort with something that glorifies and exceeds the bestial nature of their debut EP.

From the opening intro followed by the ravenous vocal and shredding of “Hordes of Domination” to the blast beat fury “Imperial Hate”, the listener is pelted from every angle with bestial black metal.  This is a drum and guitar attack all the way through, no rest is given, like a machine gun every note from the guitars and drums come firing full speed head-on. Sulphurous Northern Bestiality holds much in common with the Angel Slaughter EP but also adds a coating of amplified belligerence via a constant pelting of guitar leads, drumming and snarls from beginning to end. Nothing much changes on this record, it's more of the same all the way through. The methodology was made clear from the inception of “Horses of Damnation”, all other songs fall within that structure in offering a storm of carnivorous war metal.

What Sulphurous Northern Bestiality lacks are some guitar solos that would have fitted perfectly giving the speed the music is being played at. This would have helped the flow of the record as it becomes repetitive (buy not boring) rather quickly. Plus, with the production being decent for this kind of music, some solos would have lifted the song writing properties a bit. However, the guitar leads compensate for this absence to an extent as on some occasions the leads were so addicting that I would forget about the glaring issue. Entries like “Goatkraft’s Command” and “Spell of Black Pestilence” strengthen the mental image of a devastated environment via the guitar leads and commanding textbook war metal blast beats.

Due to the record being so short, the positives about Sulphurous Northern Bestiality are more memorable than the faults. However, it does not mean music need not be improved, as should Goatkraft implement the suggested for a follow up release, it would demonstrate positive growth and better composure within the unit.

For some favorite tracks I would have to bestow that upon “Bestial Desecration” “Deathblade of Plague and Torment” and “Volcanic Orthodox Necromancy”; they display perhaps the best drumming, riffing and vocal performances of Sulphurous Northern Bestiality. This debut is good but holds potential to be significantly better. This rancorous effort feels to be an extension of Angel Slaughter in preparation for an even more menacing assault.