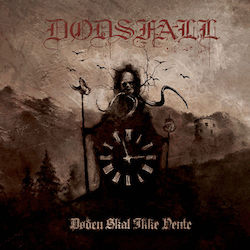 The best days of Norwegian black metal are long gone, aren't they? The eclipse of "De Mysteriis Dom Sathanas" will remain untouched eternally, the hypnotic anthems of Burzum cannot be beaten and the majestic approach of Emperor still sends shivers down my spine. But sometimes an album brings back the glory of the old days, at least to a certain degree. This is where Dødsfall's latest album sets in, because it spreads very authentic Norwegian vibes. There is this cold atmosphere, this combination of icy guitars and gloomy breaks, for example in the opener "Hemlig Vrede" (pay attention to the piano lines). Dødsfall have not recorded this work in order to create the most violent full-length ever. This would have been probably doomed to failure. Of course, some blizzards blast across the snow-covered landscapes, but mid-paced sections and a certain melancholy also play an important part. Multi-talent Is, responsible for vocals, bass, guitar and song-writing, gives all that he has and the skillful drumming of his companion called Telal adds value to the album as well.

What I like is that the songs are not predictable. The smooth flow at the beginning of "Svarta Drömmar" comes to a quick end as soon as an acoustic break appears. The track develops fantastically, neither lacking black heaviness nor great melody lines and the nagging of Is fits perfectly, with this well-known mixture of hatred and insanity, the vocals leave its mark. Of course, both the voice and the music do not present something totally new. But I think that this has not been the goal of the duo. Tradition has always had its place in black metal, not only in terms of the musical approach, but also with regard to the lyrics. It is therefore great to hear that the band still does not use the English language. Black metal means home, nature and integrity; maybe a special form of integrity, but I guess you know what I want to say, and these cornerstones make it almost logical to prefer the mother tongue.

The continuous velocity changes lend the ten tracks a dynamic overall impression. The furious sections benefit from the fact that there are so many tempo variations. Thus, their impact is remarkable. Okay, it is also true that the album does not belong to the most intense works of the sub-genre. Formations such as Urgehal or Tsjuder prefer a rawer way of proceeding and those who worship only the narrow-mindedness of "Pure Holocaust" can keep kneeling in front of their Demonaz altar. By the way, the here reviewed album also has nothing in common with the rumbling production of Immortal's masterpiece. Quite the opposite, it sounds very mature and almost too clean for a black metal album from the top of Europe. Nevertheless, the production paints a coherent picture. This is no "good time black metal" or something like this, but an honest dose of darkness. Perhaps an absolutely outstanding highlight is missing here, but its homogeneity is exactly one of the biggest advantages of Døden skall ikke vente. All songs profit from a smooth flow. And so, this output does not mark a new milestone, but it keeps the church-devouring flames of Norwegian black metal burning.