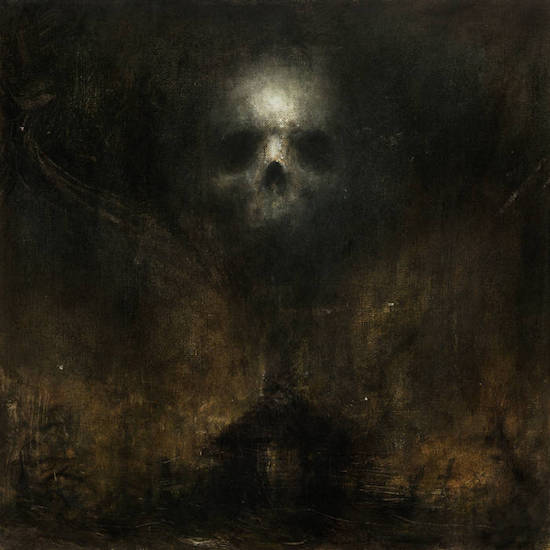 Naas Alcameth of Nightbringer fame is one of the most prolific artists of American black metal and on 2019 AD he has unleashed his most recent project Aoratos.

Those familiar with Alcameth’s work know that he has always excelled at creating an overwhelming and engrossing sound in a variety of ways while using black metal as a foundation and that unique musicianship is also present albeit in its most unique form yet. For starters Gods Without Name is drastically different from the elaborate and opulent musical compositions that Alcameth did for his other projects, in here it’s a much more straightforward and streamlined style of black metal but with no less ambition or focus and what he created here is his darkest and most punishing music yet. As I mentioned before while the compositions are more streamlined this actually works for the music’s advantage. Instead of grand dark symphonies that Alcameth created in the past, for Gods Without Name there’s pure and raw black metal combined with tinges of dark ambient music and it creates a very menacing sound meant to evoke the feeling of being lost in a dark forest and due to the more streamlined approach the albums has a focus and sense of consistency that oftentimes gets lost in Alcameth’s other projects which are more experimental.

That being said, this album is not devoid of experimentation or innovation, the aforementioned tinges of dark ambient are what give the album a palpable sense of darkness and grimness that’s punctuated by aggressive performances; all the instruments here work in perfect unison, there isn’t a particular standout because all the performances (mostly handled by Alcameth) are excellent and focused. Alcameth’s vocals are supported by the guest work of Nox Corvus who previously worked with the former in several of his projects and Chthonia, and while Alcameth is on the lead he carries the album with his unique brand of frostbitten shrieks and growls which the additional vocals contribute in creating a very demonic and primal sound to carry on the music.

The final aspect is how the album flows and the compositions of the songs. In many ways this album follows a rise and descend pattern and momentum is the name of the game here. The use of atmosphere is paramount in opening each track, building its momentum which then bursts into a deluge of blast beats, brutal riffs and wolfish vocals. The first half of the album is where this is better exemplified. The opening track “Parallax Pt. 1” is pure dark ambient with the distorted guitars and keyboard in the background creating a somber atmosphere which then leads into the second track “Holy Mother of Terror” which is unrelenting from beginning to end and this continues for the rest of the tracks. More impressively the dark ambient sounds are fully incorporated into the more aggressive tracks effortlessly, the use of keyboards, faint choirs and even noise complement the main instruments and the final result is an overwhelming and merciless symphony of chaos. The final three tracks are what close the album in a fantastic way, after giving you a taste of sinister black metal, the last third of the album is pure dark ambient where the tinges of black metal are used in the background. The album ends with an extended dirge of dread, the song “Dread Spirit of the Place” is the opulent last full track of the album and in here is where the mixing of black metal and dark ambient is fully realized to its full potential, with tribal drums and a crawling which then explode in pure black metal goodness. In conclusion the album excels in having a chaotic yet controlled flow, where it uses the dark ambient influences and black metal to their full potential. Finally, the album has an excellent production quality, black metal is often praised for a gritty production but for this album, the polished production is what gives it the extra layer of shin for everything to sound exactly as it needs to.

Overall Naas Alcameth has succeeded in creating a new and unique band with its own style and voice and like I said at the beginning this is also his darkest yet. It’s an expertly composed album that succeeds in creating a sinister sound, it’s also a must listen and a top contender for album of the year.