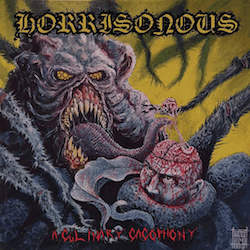 These Australian chefs have the recipe to creating a nasty and nutritious dose of death metal; the kind that raises the hairs on your skin from the moment the first vocal is sung, the fist riff is played and the first stroke of the snare drum is applied. As it has been from the beginning I discovered death metal, the artwork is the sole contributor responsible for my peaked interest in this gem released on the 22nd of January, 2019 through Memento Mori. Having resembled and brought back images of a scene out of Hannibal (2001), I could not resist temptation, and I’m glad I did not. What is to be witnessed on this massacre of ethics and decency, is death metal that shape-shifts constantly to invoke peaking levels of bliss as it strokes your cravings maliciously. Even If the artwork had not been as vile as it is, reading through the names of the tracks would have been more than enough to suck me in; “Flesh Presented for Orgasmic Torment”?, that’s evil.

On Horrisonous’ debut titled A Culinary Cacophony, you’re given 41 minutes of putrid lyrical content, classic death metal riffs that change course often and unpredictably as they experiment with slow decomposing doom metal and black metal tremolo picking. You get vocals that range from goring gutturals and raw black metal snarls to a drumming performance that displays both patience and discipline in its execution. With an opening the likes of “Kuru Worship”, Horrisonous set their standards so high that I questioned their ability to keep it. My fears were dispelled due to the band’s ability to not just maintain that level of quality, but exceed it as well. By carefully incorporating all of the above mentioned techniques into their sound, Horrisonous managed to create something that exhibits the band’s ability to play fluently when transitioning to and from death and doom metal sections among other genres. Horrisonous as a unit plays with a very calculative and precise level of effectiveness; they never sound sloppy, the music never leaves you feeling overburdened, instead you are aroused with delight as you drift among diverse musical disciplines.

“A Tale of Matriphagy” exquisitely demonstrates how much of a wrecking force Horrisonous is as a unit. Borrowing classic death metal and mixing it with melodic metal, black metal and melodic death/doom riffing; the song reeks of contrasting emotions with melancholy being one that appears towards the ending of the track in an attempt to cast a gloomy aura of the record. The fact that they experimented with a debut full-length tells of the high confidence existing in their musical abilities. Some bands experiment to their own detriment by just throwing things into their music that fails to compliment or even sustain what little enjoyment is present on the effort. Adding to the point made, Horrisonous not only experiment’s during the total runtime of A Culinary Cacophony, but they convey a steady-handed and level-headed approach. They know just how much of any element is enough; thus implying having the knowledge and wisdom of where and how to exit those experimental moments. Though using various combinations to generate an appeasing record , that Australian death metal dressing follows A Culinary Cacophony with unfettered strides. Yes this is quite the blend of styles, however; the chefs brewing this broth appear to be familiar with the Too many cooks… proverb.

There is a nod to Deicide’s “Sacrificial Suicide” in terms of the verse’s pattern and another to Iron Maiden in the form of the final and lengthiest track titled “The Number of the Feast”. Both entries exercise the same discipline exhibited in the beginning and are among the stronger songs to be discovered on A Culinary Cacophony.

A Culinary Cacophony is a solid album in which I hope garners the attention it deserves. Many can take a few lessons from this impressive debut; as it displays the importance of good organization where the implementation of diverse styles is concerned. Another win for Australia, whom in my opinion play death metal with much efficiency and cohesion. If you’re looking for the duck sauce, you will surely find it here.