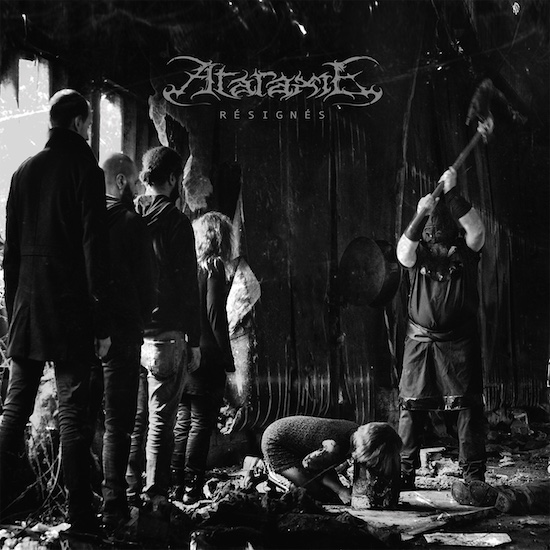 Appearing to be attached to the primary idea of machine-like expend-ability, each composition on Résignés reveals feelings of helplessness by means of societal conformity until the time of expiration. A robotic sense of programming, the kind humans have (for centuries) dwelled in and continues to. The final result, being unable to think for oneself, sheepishly relying on others, rather than being self-sufficient, the individual sacrifices freedom for slavery in so not just destroying themselves but damaging the earth in the process. So many words can be used to describe Ataraxie’s Résignés; torturing, bouldering, burdensome, hypnotic and agonizing. All this manifest on Résignés with ease and in abundance; coming from a band that has been making funeral death doom since the early 2000s. Having actively released music since their formation in 2000, with 3 full lengths, some demos, splits and a compilation, Ataraxie’s latest sermon marks the 4th full-length installment of yet another tormenting chapter in their book of scars. Having no prior impressions of Ataraxie and more so a limited knowledge of the funeral/death doom genre, the chances of Résignés not appealing to my tastes were high; however, so was the potential to astonish, and that they did, convincingly. Marked by thundering power chords, strong bass-lines, vocals that convey anguish, heavy handed drums and alluring guitar work, Résignés stands as the best funeral/death doom record I have heard in 2019 thus far. Even with the legendary Evoken releasing "Hypnagogia" which I found pleasure in and many praised, I can’t help but gravitate more towards Résignés. For a recording lasting well over an hour, as records within this genre generally do, that did not come as a problem or blunder because through the music lies a sense of connectivity and gradual movement. It’s a piece that speaks to the listener through its artwork and lyrics that provide strong suggestions of the current era. Themes that many are familiar with but choose to ignore or ‘sugar coat’, all this for the sake of societal convenience and ‘acceptance’ are referenced.

The music on Résignés will eventually attach itself to the consciousness of whomever is listening through its slow and steady build towards climaxing moments either vocally or instrumentally. These tracks create a swelling feeling of hopelessness and agony, and with each song lasting more than 15 minutes, the weight of the music takes its toll. You can feel despair building on ‘People Swarming, Evil Ruling’, its transitions from the funeral doom to black metal drumming surges the seriousness and agonizing desperation while bringing to light the blindness of ‘civilization’ and its punishment for ignorance and arrogance. The songs are structurally strong, showing no deficiencies in their compositions by aid of temper roaring and somber discourses. Melodicism plays a key role when trading between the slow, crushing almost interminable sections and mounting quickening strides; each second priming to explode with cataclysmic repercussions. Take the more approachable ‘Résignés’, amassing serious density into one husk until its threshold is met only to release it all through bursts of culminate tempo shifts as also heard on ‘Coronation of the Leeches’. Just like gathering a herd of cattle for slaughter, Résignés creates a sense of impending doom for the systematized human batteries as they draw nearer to their moment of cessation. I have to disagree with Dave Mustaine, the system did not fail, rather a successful mechanism, it was designed this way intentionally, it was never meant to provide spiritual or mental growth, only constructed to harbor a cycle of dependency, gluttony, foolishness and annihilation; all the while sheltering an ever-growing conforming species under its many illusions. What did fail is mankind’s will to break free from its shackles. The feeling of servitude lays like a leech on Résignés, it never regresses only grows until fully shelling the listener in with walls of helplessness and more-so, guilt.

The totality of the problem is what Ataraxie manage to capture here with Résignés. Encompassing a variety of emotions, Résignés puts the actions of the droning species under microscopic scrutiny. With musicianship that breathes life into the cover artwork and draws out the problems leading to, at this point what I would consider arrogant self-destruction, Ataraxie have crafted a record worthy of the ‘essential listening’ tag. The velocity strikes at manufacturing a resounding representation of the main matter, but with the absence of any clemency whatsoever. These songs carry with them the grueling weight of regret, slowly dragging the listener down the strip of requital. Ataraxie’s inculpatory, unforgiving and beckoning pulses of funeral death doom is like a culling of the unwise, a merciless leveling of the imprudent in the name of vengeance. The production helps the music to apply its force onto the listener during the gradual dimming of humanity's light. It’s clear and pin-points the exclaiming elements. Whether it be the ill-omened pop of the drums and bass, the stretching death metal growls, the anguished yelling or the looming presence of the guitars, the despair is genuinely felt through the prolonged passages of distress. Anyone who finds pleasure in funeral doom and specifically the gloomy imminent demise of the ‘civilized’ will enjoy Résignés, it’s an album that holds dear the fundamentals of the mixed sub-genres when casting its shade of woe.