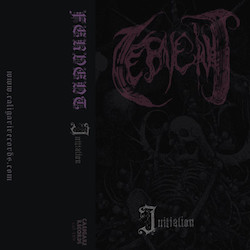 Fervent joins the likes of Carcinoid and Bloodsoaked Necrovoid with their raw and louring style of death/doom metal. With the band’s debut release being a 4 track demo titled Initiation, Fervent makes it clear to all that they mean to be taken seriously. Possessing a sound quality that is slightly reminiscent of Spectral Voice’s Necrotic Doom and the vocal depth (that is the primary redeeming quality on Initiation) needed to attain a sub-current which would satisfy those who gravitate towards the primitive; Fervent goes on to add a foggy overlay to an already mid-toned recording. Though I am not too familiar with the Finnish underground death/doom and death metal scene in its current state, I have encountered old bands the likes of Rippikoulu, Pestigore and Melcorn, all of which have contributed to craft Finland’s thriving extreme metal underground. And though there is a cleaner melodic form of death/doom metal slowly becoming the mainstream appeal, Fervent and many others continue to supply the dissident gathering with the old-garde, earthly way.

Initiation has a commendable pace that gives wake to the appeal of the musicianship. The self-titled track and “Glowing Rage” fluctuates among fast, mid-ranged and dragging bridges abruptly; this sudden change in momentum does keep the listener keen. However the decrease of guitar and drum variation following the aforementioned, does result in a monotonous sounding record in some cases, such as on the track “King in Death’s Blossom”. Though it’s the shortest recording featured on Initiation, the repetitive chord and note structure utilized, gives-off an aimless, wandering aesthetic. I surmise the main fault linked to this is the production which paints a hazy aura on the entirety of the record; however, because the snare drum barely has any audible feedback when struck, its effect rarely compliments the rest of the music, causing the demo to feel empty sometimes. That said, there are good qualities to be found, as the offering is consistent in creating an obscure and violent shade on Initiation. The guitar structure on the demo is fairly straightforward and does display a bit of tremolo picking along with some catchy guitar leads most notably on the opening track.

The overall pedigree of Initiation is genteel, there are enough enticing parts on the recording to warrant numerous play-throughs; and though Fervent does not introduce anything particularly new with the genre, they sound fairly capable of delivering a release of far greater standards. Not to say this effort lacks any assiduity, but it’s monotonous tone could have been wiped-away with a bit more diverse musicianship. Keep in mind Initiation is only a demo, but it possesses much potential in which Fervent can indeed extract from and make improvements to.